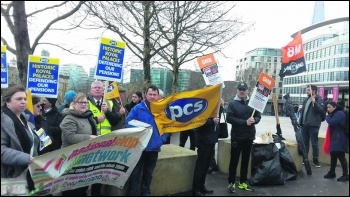 The national executive committee (NEC) of the civil servants' union PCS has voted unanimously to ballot members for action on pay. The ballot will run 18 March to 29 April.

The vote will cover workers in the core civil service and any other groups of workers who have asked to be included. The key demand is a 10% pay rise, to start to undo a decade of austerity, and the return of civil service-wide pay bargaining.

Socialist Party members on the union's NEC supported the call to ballot. Like all reps, we will work tirelessly for a massive 'yes' vote, not just as a referendum on hated Tory austerity, but in order to produce an overwhelming mandate for strike action.

Taking determined action is the only way to defeat a government that will use any excuse to keep civil service pay rises well below inflation, refusing to ever seriously discuss pay with PCS.

The PCS leadership also agreed to a small, but significant, rise in subscriptions, to allocate to the union's strike fund. On top of more than £1 million already allocated, this will provide additional resources to use for longer-duration, targeted action in specific vulnerable areas. This will ramp up pressure on the government, supplementing all-member national strike action. Socialist Party members have stressed the need for both.

This ballot will overlap with national PCS elections, that will determine who sits on the NEC. This year, the post of assistant general secretary (AGS) is also up for election. The left candidate for AGS is Socialist Party member Chris Baugh, a former union rep in Land Registry, who has been re-elected as AGS by members every five years since 2004.

While the next key task is winning the pay ballot and preparing for strike action, it will also be extremely important to have a fighting, socialist PCS leadership, and especially to re-elect Chris. The incoming union leadership, decided by these elections, will control the pay campaign strategy. It is crucial that Chris, a rep since 1976 and a key figure in all civil service-wide strike action since 1981, retains his elected AGS post.

Chris has stood each time as the left candidate, chosen by PCS Left Unity members. Left Unity brings together socialists of all parties and none in PCS, including the Socialist Party.

Despite opposition from PCS general secretary Mark Serwotka, Chris was chosen again by Left Unity members, in the same democratic process that for 20 years has ensured freedom to differ over strategy and tactics but unity around left candidates, to ensure the union's leadership is made up of socialist activists who don't ignore union conference policies or demobilise national campaigns.

Mark Serwotka's decision to ignore Left Unity process, potentially splitting the left, is a grave threat to the unity that union activists need to win the pay ballot. Serwotka, a Left Unity member, previously announced he would respect the results of the democratic Left Unity candidate selection process.

Mark has since totally changed his tune, backing instead Lynn Henderson, a paid PCS official who has never been a PCS activist.

We call on all serious PCS activists, and all anti-austerity campaigners, to unite behind the pay campaign, sparing no effort to galvanise members to vote in the ballot. And to help re-elect Chris Baugh as AGS, alongside a Left Unity-led NEC, that will put the defeat of austerity - be it pay cuts, jobs losses, office closures or further threats to our pensions - at the top of the union's campaigning agenda.

Workers at the beautiful Tower of London, Kensington Palace and Hampton Court were on strike on 6 February against an attack on their pensions. PCS and GMB union members will do the same again on 16 and 21 February.