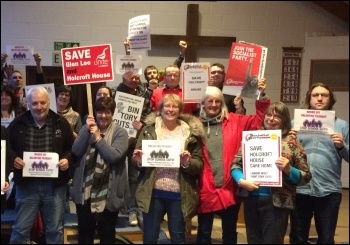 In Southampton, the Labour council is proposing £15 million cuts to services. They threaten 134 jobs and propose the closure of Glen Lee and Holcroft House, council-run care homes.

There is a crisis in our schools too. Southampton Council faces opposition from the local branches of general union Unite, public service union Unison, and the National Education Union (NEU).

Oasis Academy Lordshill has lost £343,900 - £566 per pupil - over the same period. That means larger class sizes, cutting subjects like art and music, and losing teaching assistants and admin staff.

Like similar meetings around the city, there was a clear call for an immediate end to further cuts.

We want our £136 million stolen by the government back, and the council must link up with the unions to mobilise a fight for it.

Such a stand would gain huge public support locally and beyond, and put enormous pressure on this weak and divided Tory government.

But right now, Southampton Council is increasingly isolated. There's not a lot of support out there for a council destroying our services.

And there will be consequences. If Labour councillors continue to claim that nothing can be done, they must expect to be challenged at the local elections on 2 May by those prepared to fight.

Furthermore, by doing the dirty work of the Tories, Labour councillors undermine Jeremy Corbyn's anti-austerity project, and risk failure in a general election.

That is why I am standing in Southampton's Coxford ward by-election on 14 March for the Socialist Party, appearing on the ballot paper as 'Socialist Alternative Putting People First'.