A timely reminder of racism in the USA 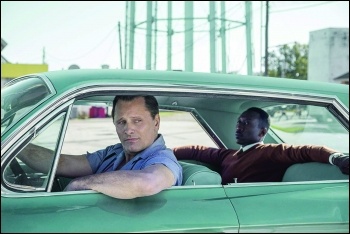 The film has been called a buddy/road trip film in the tradition of 'Driving Miss Daisy'. But it is much more than that and yet, perhaps, less than it could be. Still I highly recommend it.

Based on a true story, Italian-American bouncer, Tony ("Tony Lip") Valulonga (played by Viggo Mortensen) is hired by African-American pianist Dr Don Shirley (Mahershala Ali) to drive him on a tour of America's Deep South with two other musicians in his trio in the early 1960s. A white man employed by a black man in America's Deep South; what could go wrong?

The Green Book of the film title is taken from 'The Negro Travellers Green Book,' published by Harlem mailman Victor Hugo Green from 1936 to 1966.

This was during the era of the Jim Crow laws, which enforced racial segregation in the American south until 1965 and the civil rights movement. The guide was to services and places relatively friendly to black people.

Tony is given a copy by Dr Shirley's record company. His wife, Dolores, asks him if it is for "travelling while black" - referencing a spate of white people calling the police on blacks doing ordinary things in public in recent years.

Don Shirley was a classical and jazz pianist and composer. His mum, who was born in Jamaica, taught him to play the spinet when he was two and they used to busk in New York.

He was 'discovered' and was the first black student at the Leningrad Conservatory of Music. He was feted as a performer by liberal white Americans, including John and Bobby Kennedy.

Don decided to tour the south because of segregation but seems to have had little idea about the lives of black working-class southerners.

The film deals with a number of incidents of segregation and the Jim Crow laws, which are upsetting, but these do not dominate the film. I'm sure that the trip must have had more incidents.

Viggo Mortensen says that the aim was to make a film that pointed out the realities of the history of racism in America but also a film that a range of people would go to see.

Don is not able to stay in the hotels he plays in or eat in their restaurants. In the end he refuses to play his final concert because he is not allowed to eat in the hotel restaurant.

On the whole it is an uplifting film about how getting to know someone can help stop individual prejudice. Tony is an employee and all the other employees he encounters are black people employed by white people. The film shows that they have a lot in common underneath.

When Don gets beaten up in a bar and Tony is angry, Don says: "If I went to a bar in your neighbourhood, would it be any different?", pointing out that racism is pervasive in America.

The film is a timely reminder of racism in the USA before the civil rights movement and how much was achieved by that struggle - as well as how far we still have to go.

In the era of Trumpism, some have said that the Green Book should be revived. But what is needed is not a guide to safely living as a black person in racist America, but working-class struggle to end racism and the capitalist system which perpetuates it.