Editorial of the Socialist issue 1030 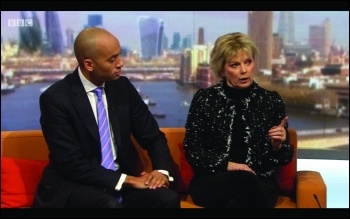 On 14 February, Theresa May suffered her tenth parliamentary defeat over Brexit. The Tory party is split down the middle. May's government is on the brink of collapse.

Yet it is at this precise moment, one of intense governmental crisis, that eight Blairite MPs have chosen to resign from the Labour Party, breaking away to form their own 'Independent Group' in parliament.

The timing is very deliberate. These MPs aim to inflict the maximum possible damage on Jeremy Corbyn just as the government's Brexit crisis reaches fever pitch - just as many working-class people see an opportunity developing to force out the rotten Tories and their hated austerity agenda.

The 'Gang of Seven', now joined by Joan Ryan, have chosen to carry out this act of sabotage ahead of a possible general election - something that could be posed in the next months, especially if the parliamentary deadlock over the Brexit deal continues and if mass trade union action is organised to force the Tories out.

But the announcement of a Blairite breakaway should come as no surprise.

Since Jeremy Corbyn's election as leader, the Socialist Party has argued that the potential exists for the formation of a mass workers' party, with a socialist programme, around him. But we have also warned consistently that this exists alongside a pro-cuts, pro-capitalist Labour party. It is this pro-capitalist wing that remains dominant in parliament, local council chambers, and Labour's bureaucratic machinery.

The ultra-Blairites who make up the Gang of Seven should have long ago faced replacement, via a democratic process of mandatory reselection, with working-class fighters and socialists.

Indeed, so should all the MPs, most of who remain on Labour's benches, who have acted to undermine Corbyn's anti-austerity, anti-war stand. After all, a whole number of them, including deputy leader Tom Watson, are now using this betrayal as an opportunity to attack not those who have split from the party, but Jeremy Corbyn.

Indeed, just hours after the breakaway was announced, Blairite MPs who have remained in Labour were publicly hinting that the Gang of Seven represents a kind of 'advance guard'. 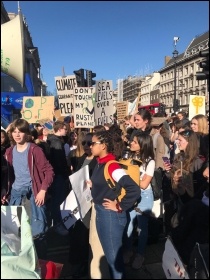 The Scottish MP Ian Murray, for example, responded to the announcement of the breakaway with a thinly veiled threat. It is Corbyn who needs to "decide whether he wants to keep his party together" Murray argued. The strong implication of these comments was that it is only on the basis of Corbyn capitulating to the demands of the pro-capitalist Labour right that he can hope to avoid similar walkouts down the line.

Sickening outpourings of sympathy have also been a common theme in the responses of right-wing Labour MPs to news of the seven having left the party. Outrageously, such sentiments have also been echoed by some trade union leaders.

Dave Prentis, right-wing general secretary of the public sector union Unison, tweeted that he felt: "Labour's overriding concern must be to look long and hard at the reasons why the MPs feel they are no longer able to stay in the party".

Here, he echoes the Blairites in placing the blame for this breakaway on the shoulders of Corbyn and his supporters, with not a hint of condemnation of the actions of those who split away. This is despite the fact that these MPs have acted to take the heat off the Tories in crisis - not to mention their generally pro-austerity, anti-working-class position.

These sympathetic sentiments stand in stark contrast to the outrage that will be felt by the majority of Labour Party members, rank-and-file trade unionists and working-class people more widely.

Absolutely correctly, members of MP Luciana Berger's Wavertree constituency party sought to raise a vote of no confidence in her after she refused to deny that she was planning to break with Labour - a plan which has subsequently been decisively confirmed.

Wrongly, local Labour members were put under pressure to withdraw this motion in the name of 'unity'. Deputy leader Tom Watson intervened demanding the constituency party be suspended. He cited, among other things, spurious claims of antisemitism.

Unfortunately, mistaken attempts by Jeremy Corbyn's leadership to conciliate with the Labour right have allowed this Blairite fifth column to continually undermine him.

This split in parliament underlines the urgent need for a change of approach on the part of Corbyn and John McDonnell - whose conciliatory tone continued even as he spoke less than 24 hours ahead of the widely predicted split on the Andrew Marr show.

The Labour leadership must now go on the offensive. As well as urgently mobilising the unions and working-class people to fight for a general election and to kick out the Tories, they must also mobilise to take on the Blairite saboteurs, most of who continue to don Labour rosettes.

The initial breakaway represents only a small portion of the pro-austerity wing of the Labour Party. It includes some relatively prominent figures - former shadow chancellor Chris Leslie, and a former Labour leadership candidate, Chuka Umunna, for example. But the fact that the majority of the pro-cuts Blairite MPs have, for now, remained behind in the Labour party, is almost certainly a calculated strategy.

So far this 'split' is evident only at a parliamentary level. The seven have not yet launched a political party taking with them substantial numbers of Labour members, instead suggesting that a new party may come further down the line. This indicates a possible expectation that more Labour MPs will leave to join a separate group in the future.

It will likely be hoped that this breakaway could act to help prevent a Corbyn-led government from coming to power. In this way, it could play a similar role to the Social Democratic Party split of 1981. But given the mass anger in society, and the deep crisis facing the Tory party, it is far from guaranteed that this will succeed.

It therefore makes sense, from the point of the view of the capitalist class, for the majority of its representatives within the Labour Party to remain there for now. These Blairite MPs could be used effectively to sabotage a Corbyn-led government should he be elected and attempt to implement pro-working-class policies. A mass walkout by Blairite MPs can be kept in reserve, potentially used in an attempt to bring down a Corbyn-led government should it begin to pose a serious threat to the interests of the capitalists.

The failure of the Gang of Seven to launch a party at this time also hints at what they hope will be a broader realignment - quite possibly involving a part of the pro-EU wing of the Tories, for example.

It is also a possible sign of the more deep-rooted problem that they face: the crisis of capitalism and the difficulty of building and securing a substantial base of support for their neoliberal, austerity agenda. It is only necessary to look across the channel to France, where the mass movement of the 'gilets jaunes' (yellow vests) continues to demand President Macron (who has been looked to as a 'model' for winning popular support for a neoliberal programme) resigns, to see the evidence for this.

Correctly, Unite the Union general secretary Len McLuskey has called for by-elections to be triggered in the constituencies these former Labour MPs represent. If socialists and class fighters were selected as Labour candidates in their place, this could be an excellent first test of the real support that exists within society for their agenda.

Nonetheless, Corbyn's failure to articulate, in a clear and consistent way, a socialist approach to the question of Brexit, does allow a potential space for these forces to win some support by playing on the confusion and division which exists within the working class on this issue.

This underlines the importance of Corbyn making clear a socialist approach to the question, arguing that a government led by him would fight to re-open negotiations on an entirely different basis.

A starting point for this would be outlining a programme for protecting and improving workers' rights, including rights for migrant workers and refugees; abolishing all anti-trade union laws and rules like the EU posted-workers' directive - which can be used by employers to facilitate a 'race to the bottom' in wages and conditions; opposing all EU regulations which act against the interests of working-class people, such as those that create obstacles to governments carrying out policies such as state aid and nationalisation; and outlining a programme for a new collaboration of the peoples of Europe on a socialist basis.

In a situation where jobs are currently being threatened, with the spectre of a no-deal Brexit often being used by bosses to justify closures and cuts, Corbyn should immediately pledge that a Labour government would act to protect jobs. This means pledging to nationalise plants threatened with closure - the most recent example of which is Honda in Swindon.

The Gang of Seven have exposed more clearly than ever the real nature of the battle that must be waged to refound Labour as a genuinely democratic, socialist party, with a renewed, federal structure. The Socialist Party calls for the convening of a labour movement conference, in which all anti-austerity forces, including trade unions and socialist groups such as our own, could participate.

Such a conference could discuss the urgent tasks facing our movement. Most immediately, these include building mass action to fight for a general election, deselecting Blairite MPs and their replacement with fighting socialist candidates, and building the struggle to transform society along socialist lines.