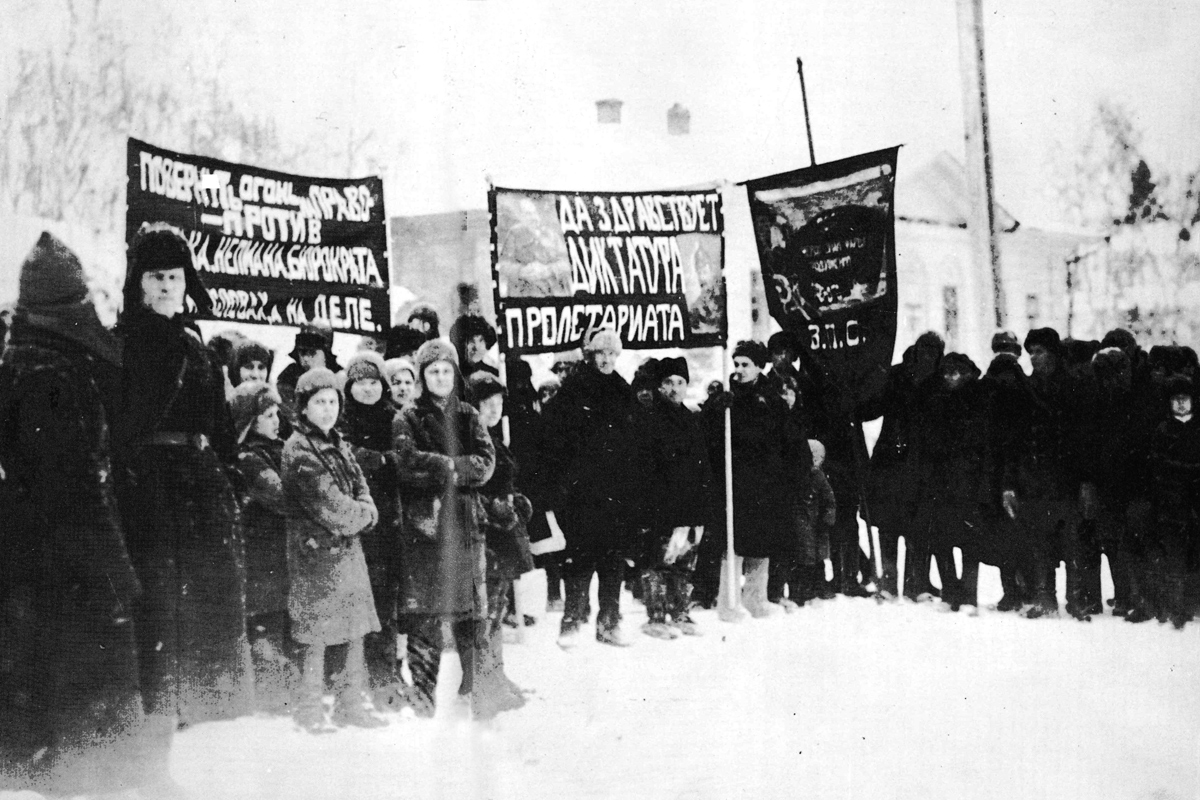 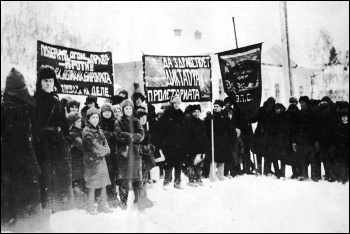 Left Oppositionists protesting in a Siberian labour camp, 1928 – their banners make demands against the bureaucracy and wealthy peasant employers, and for revolutionary workers’ democracy   (Click to enlarge: opens in new window)

The motivation was not personal rivalry, but their need to wipe out the original ideas and methods of Bolshevism, the legacy of the 1917 October revolution, and any element of workers’ democracy within the Soviet Union.

Often it is asked: how could Trotsky, a key leader of the Bolshevik Party alongside Vladimir Lenin and the head of the Red Army, allow Stalin to rise and cement power around himself? Why did Trotsky not take power himself with the Red Army? How could he be ‘outmanoeuvred’ by Stalin?

Trotsky answered many of these questions himself, on the basis of his analysis of the political degeneration of the young workers’ state.

Trotsky opposed and organised against Stalin through political means. Stalin fought Trotsky and the ‘Left Opposition’ through state-sponsored terrorism.

“Stalin conducts a struggle on a totally different plane,” Trotsky wrote. “He seeks to strike not at the ideas of the opponent, but at his skull.”

Subsequent revolutions in Germany and Hungary failed, primarily because of the mistakes of inexperienced leaderships – and the lack of a party with the clear methods and ideas of the Bolsheviks.

Defeat in the German revolution in 1923 – which the blunders of Stalin and Nikolai Bukharin in the Third International’s leadership contributed to – reinforced the isolation of the young Soviet state.

Like in any period of setback for the working class, even some revolutionaries turned away in despair from the genuine democratic and working-class methods of Marxism. They were joined by ambitious middle-class careerists, and malcontent, incompetent officials looking for promotion. This was Stalin’s base of power in the party.

In 1923, Lenin called for the removal of Stalin from the post of general secretary. He was aware of the dangers to the revolution and Stalin’s increasing work to bureaucratise the new state and the Bolshevik Party – by then called the Communist Party.

The Soviet Union was becoming “a workers’ state with bureaucratic deformations.” Lenin began preparing a struggle against the bureaucratisation of party and state. But his death in 1924 prevented him leading that struggle. 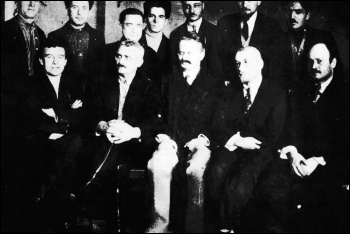 Some leading Left Oppositionists at a meeting in Moscow, 1927 – Trotsky seated centre   (Click to enlarge: opens in new window)

With Lenin dead, Stalin began a systematic elimination of those fighting to defend workers’ democracy. In sync, the Third International increasingly became a tool of Russian foreign policy for the Stalinist bureaucracy.

In 1923, Trotsky’s Left Opposition was established as a faction of the Communist Party. He proposed the ‘New Course’ in October: to campaign against bureaucratisation; for proven working-class elements to take leading positions in the party; for elections to all party positions; a plan for industrialisation; and policies to improve the lot of poorer peasants.

The bureaucracy feared the programme of the Left Opposition – for the restoration of workers’ democracy – would find the ear of new sections of workers. And it did. Thousands of workers supported it.

A struggle also erupted over Stalin’s so-called theory of ‘socialism in one country’. The Left Opposition continued to argue for genuine internationalism, and warned this policy would change the Third International into a counter-revolutionary tool of Stalin’s foreign policy.

Stalin’s direction and policies in the 1920s and 1930s resulted in disasters for the Soviet and international working class. The failed revolution in Germany in 1923, and subsequent mistakes, paving the way to fascism in 1933. The betrayal of the British general strike, when workers could have taken power, in 1926.

The bloody massacre of the Chinese revolution, 1925-27, at the hands of the capitalist and landlord Kuomintang party. Stalin had instructed Communists to join it, and allow Kuomintang forces to enter Shanghai in April 1927 – setting them up to be massacred at the hands of pro-capitalist military leader Chiang Kai-shek. 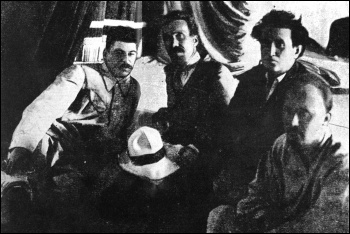 Stalin (left) with fellow Bolshevik leaders Rykov, Zinoviev and Bukharin – all of whom he later had executed   (Click to enlarge: opens in new window)

Members of the Left Opposition, followers of Lenin and Trotsky’s ideas, were arrested in their thousands and sent to labour camps in Siberia. Not only did they refuse to collaborate in any way, they continued their protests in the camps!

Later, fellow oppositionist Adolph Joffe killed himself. It would be the first of many of Lenin and Trotsky’s allies and Left Oppositionists who were driven to death, or directly murdered, by Stalin’s regime.

A “river of blood” opened up between the genuine ideas, methods and workers’ democracy of the Bolsheviks and the October revolution, and the totalitarian methods, and systematic and ruthless repression of Stalinism.

In January 1928, Trotsky was forced into his last foreign exile – his first two had been under the Tsarist regime! First he was deported to Kazakhstan. Then in February 1929 he was deported to Turkey, on Prinkipo island, near Istanbul. 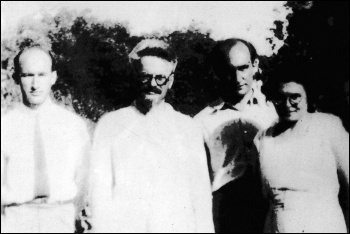 Trotsky (front centre) with his first daughter Zinaida (right) and supporters, in exile on Pinkipo island, 1929   (Click to enlarge: opens in new window)

Rather than respond emotionally to his exile, and the continued degeneration of the Soviet Union, Trotsky set about the difficult task of assembling the forces of a new international revolutionary organisation. The Fourth International was founded in 1938, adopting as its core policy document Trotsky’s ‘Transitional Programme’.

Trotsky understood that the material gains of the 1917 revolution, and the nationalised planned economy that the bureaucracy rested on, still remained. In fact, they would allow the Soviet Union to continue to make some progress, and should be defended as part of a struggle to remove the Stalinist caste that had consolidated power at its top, in a political revolution for genuine workers’ democracy.

“An organisation which has not been wakened up by the thunderbolt of fascism… is dead and cannot be revived.”

Despite his central role in helping to lead the Russian working class to power, Trotsky was in no doubt of the historical issues at stake and his role while in exile. “I think the work in which I am engaged now, despite its extremely insufficient and fragmentary nature, is the most important work of my life…

“Now my work is the most ‘indispensable’ in the full sense of the word… To carry out the mission of arming a new generation with the revolutionary method.”

Debates around socialism, Trotskyism and Stalinism are once again opening up due to the inability of capitalism to provide a future for workers and young people. There are many essential lessons in the struggle of Leon Trotsky and the Left Opposition. The Socialist Party and Committee for a Workers’ International are proud to stand in that tradition today.