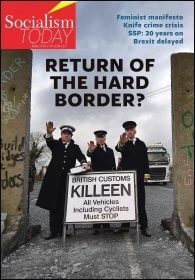 In the end they all blinked. Confronted with the cold reality of a looming no-deal Brexit, the pompous legalese that usually flavours EU summit fudge – joint interpretive codicils here, recused treaty article obligations there – was pushed to one side.

With all the heads of state that assembled at the special European Council in Brussels on 10 April seeking to pass on responsibility to someone else for triggering a chaotic breakdown of the renegotiation of British capitalism’s relations with the other EU members, the only thing they could agree on was that they couldn’t agree anything then. “April 12 is the new March 29”, a spokesperson had said after the March EU summit had deferred the original Brexit day.

Now ’29 March’ is to be “no later than 31 October”, although a further extension at that point has not been ruled out. Absolutely nothing has been resolved.

Nothing has changed fundamentally for Theresa May’s precarious position either. She promised that Brexit would happen on 29 March, and that the UK would not participate in the European elections on 23 May.

She also said that, “as prime minister”, she “would not countenance” Britain remaining an EU member after 30 June.

But Brexit didn’t happen and over £100 million will now be spent on administering the 23 May poll. However, while the initial response to the six-month extension from the Tory European Research Group (ERG) vice-chair Steve Baker was that the hard Brexiteers were unlikely to vote with Labour in a parliamentary no-confidence motion, May might well not survive ‘as prime minister’ to the summer.

As long as Jeremy Corbyn stands firm in Brexit talks against the pressure of the right-wing Blairites in the Parliamentary Labour Party to accept the neoliberal policies of the EU bosses’ club, May does not have the votes for her withdrawal agreement treaty.

In the run-up to the Brussels summit, French president Emmanuel Macron, focusing on his European election message against Marine Le Pen that leaving the EU has costs – as an exit on capitalist terms inevitably would – argued for a short Brexit extension only, leaving the threat of no deal on the table.

This was attacked by the European Commission president Jean-Claude Juncker as “only solving French domestic problems”. It was furiously denounced by the Irish taoiseach Leo Varadkar, who said a member state that vetoed an extension would “never be forgiven”.

Ireland would be particularly affected by a no-deal Brexit. The UK government’s recently published plans for a provisional tariff regime, which would apply in the event of no deal, envisaged Northern Ireland operating as a special tariff-free zone, with no checks or controls on goods moving from Ireland to Northern Ireland.

On the other hand, Ireland’s obligation as an EU member would be to apply EU duties on goods coming from Northern Ireland. This would require the Dublin government – not Westminster – to take the initiative in establishing border controls, a politically explosive development.

In early April there were reports of tensions between the European Commission and Dublin about the lack of preparations. “According to one Brussels official”, wrote Charles Grant, director of the Centre for European Reform, “if the Irish do not introduce checks, the French and others will insist on controls between the continent and Ireland”. (The Guardian, 2 April) Preserving the integrity of the single market for the interests of the big EU powers ultimately trumps the empty proclamations of ‘EU solidarity’.

Some of the first shots of the Troubles were fired at customs posts. The vast majority of the working class, North and South, do not want a return to those dark days. But, as we warn, “unless a powerful socialist alternative is built, the situation can eventually slip into renewed conflict”.

Unlike the capitalist politicians conducting the Brexit talks – who ultimately represent the capitalist classes of their respective nation states – the workers’ movement has a vital interest in workers’ unity and internationalism, including economic collaboration across borders.

But that does not mean a commitment to the EU single market rules! Initiated by the 1986 Single European Act treaty signed by the then Tory prime minister Margaret Thatcher, they underpin the neoliberal, pro-austerity and anti-worker character of EU directives and rulings on nationalisation, state aid, public procurement, and workers’ collective bargaining.

It was to bring UK law into line with the single market, for example, that the Tories’ 1990 Employment Act was passed banning the trade union closed shop in workplaces. This was enacted with the support of Labour’s then shadow Employment Secretary Tony Blair – against the opposition of left-wing backbenchers including the Militant MPs Dave Nellist and Terry Fields, and Jeremy Corbyn.

Recent polls have shown workers’ growing frustration at the seemingly interminable Brexit talks and ‘the politicians’ conducting them. A symptom of this was on display in April’s Newport West by-election when both Labour and the Tories lost votes to UKIP, Plaid Cymru, the Lib Dems and the Greens. The combined share of the vote won by the two big parties fell by 21% compared to the 2017 general election.

Another, more substantial, indicator were the results of the Hansard Society’s 16th annual audit of political engagement, which recorded disenchantment with the political system at a greater level than at the depths of the MPs’ expenses scandal in 2009.

Sixty-three per cent agreed that “Britain’s system of government is rigged to the advantage of the rich and powerful”, and only 34% had confidence that MPs would “act in the best interests of the public”.

One finding, that 54% agreed that “a strong leader is needed who is willing to break the rules”, was interpreted by the commentariat as growing support for right-wing ideas. But that is not necessarily so. The mass campaign of non-payment of the poll tax, for example, ‘broke the rules’, but in the interests of the working class.

The survey also found that trade unions were more trusted ‘to act in the public interest’ than MPs – or banks, newspapers, big business or social media companies. In that context, re-electing a fighting left leadership in the PCS union becomes ever more important.

If Jeremy Corbyn, backed even just by the left union leaders, used the Brexit extension to declare that a government he leads would take whatever socialist measures are necessary against the ‘rigged system’ regardless of the current EU rules – and that would be the basis on which he would negotiate – the Brexit debate would be transformed, in Britain and in Europe.