Shop workers demand action on pay, jobs and the right 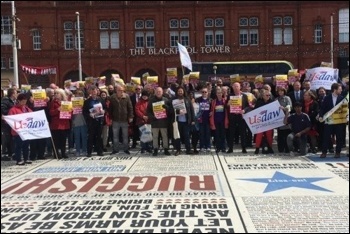 With almost a year since the departure of Blairite general secretary John Hannett, this year's annual delegate meeting of retail and distribution union Usdaw - ongoing at the time of writing - feels different.

In her address to delegates, Socialist Party member and Usdaw president Amy Murphy contrasted her approach with that of her predecessor.

She joked he used to like going to McDonald's during conference, whereas she only tended to go there to support McStrikers.

The call for this protest was launched the previous day, by Socialist Party member and Usdaw Broad Left chair Iain Dalton.

This followed discussions with Usdaw members on Blackpool TUC at the union's well-attended Broad Left annual general meeting on 4 May.

Over 150 Usdaw delegates and visitors joined another hundred activists to march from outside the conference to where Robinson had been reportedly due to speak - with no sign of him once we arrived.

The conference itself has seen several debates so far. This includes support for an emergency motion, moved by Socialist Party member Scott Jones, on the union's parliamentary group - which four of the Labour MPs who split into the right wing 'Independent Group' came from.

Given their clear opposition to polices passed by Usdaw conference - including a £10-an-hour minimum wage, rail renationalisation, and so on - the motion demanded that Usdaw's parliamentary group should only include those prepared to support the union's policies.

This demanded funding for domestic violence services for all who need them, called on Labour councils to use their reserves and borrowing powers to defend existing services, and for an incoming Labour government to pledge to restore any funds utilised for this.

Both of these motions passed unanimously.

The union's 'Time for Better Pay' campaign, launched in the last year, has featured heavily. There have been a number of demands to extend the campaign, with motions passing such as including 16 to 17-year-olds in the £10 minimum wage demand.

Another motion called for broadening the campaign to develop a charter for workers' terms and conditions.

The mover called for it to include defending premium payments and paid breaks, considering whether £10 an hour is still sufficient as a minimum, and calling for more sustained action to win.

This included pointing to the recent Stop and Shop supermarket strike in New England, USA, which defeated some of the attacks retail bosses had sought to impose on workers.

There was a heated debate around the onslaught of attacks on retail workers - particularly the job cuts in Tesco.

This, unfortunately, was not discussed directly to help formulate a strategy for fighting these attacks. Instead it found expression through a debate on restoring pay ballots within Tesco.

Members have grievances on this issue, particularly in light of Tesco's recent £2 billion profit announcement for the last year.

At the Socialist Party's conference fringe meeting, we attracted a number of new attendees. We discussed our strategy to fight attacks on workers, including that Usdaw take a leaf from the GMB union's recent protest outside Asda, and staging a campaign of protests to build support for industrial action if necessary.

Socialist Party members will be continuing to argue for the union to further develop a fighting strategy over the final two days of conference. A full report will follow. Delegates and visitors have so far bought 86 copies of the Socialist - and counting.