Editorial of the Socialist issue 1042 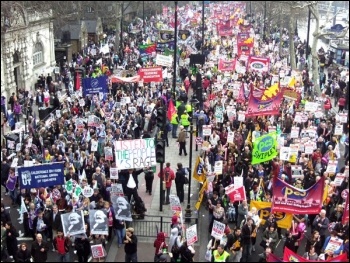 "There is a real question about whether democratic capitalism is working, when it is only working for part of the population". This was the warning of capitalist economist Angus Deaton launching his review for the Institute of Fiscal Studies (IFS) on inequality in Britain.

Britain, he declared, is one of the most unequal countries on the planet, second on many measures only to the US. Capitalism is indeed working for 'part' of the population - but only for a tiny minority. According to the IFS report, the richest 1% in Britain have seen the share of household income they receive almost triple in the last four decades, rising from 3% in the 1970s to about 8% today. Average chief executive pay at FTSE 100 firms has risen to 145 times that of the average worker, from 47 times as recently as 1998.

Meanwhile the average worker is still about £17 a week worse off, in real terms, than before the economic crisis of 2007-08. The rate of 'deaths from despair' - suicide and alcohol and drug related deaths among the poorest section of the population - have more than doubled over the last quarter of a century.

Deaton's report is trying to warn the capitalists to reform their system or face revolt. He is not alone in drawing that conclusion. Recently the founder of the world's biggest hedge fund declared that capitalism created such inequality it had to "evolve or die" because otherwise they would face "some kind of revolution" and that he would rather pay higher taxes than "face the pitchforks".

Individual capitalists recognising this does not, however, mean that they can change the nature of capitalism - a crisis-ridden system driven by the blind urge to maximise profits. The main capitalist party in Britain, the Tory party, has delivered endless austerity which is driving the living conditions of working class people into the dirt. This is the fundamental reason that they are now languishing on a pathetic 11% in the polls. Ultimately, the hollowing out in the social base of major capitalist parties on a global basis is a reflection of the misery inflicted by all governments which act in the interests of capitalism. The increasing fragmentation of capitalist politics reflects this.

Deaton and others are right to fear revolt, both electorally and in other forms. It was deep seated anger at the way life keeps getting harder for the majority which fuelled the Brexit revolt in the 2016 referendum. It was the same anger that led to the biggest surge in Labour's vote since 1945 in the 2017 snap election. Corbyn's election manifesto gave millions hope that a government which fought in their interests was possible. And it is the same anger which looks likely to lead to Nigel Farage's 'Brexit Party' topping the polls in the European elections by taking advantage of the strong mood among sections of the population that the whole of the establishment is trying to reverse the referendum vote.

The right-populist Brexit Party has deliberately announced it has no policies beyond Brexit. No wonder! Farage's longstanding support for privatisation of healthcare, for example, would be profoundly unpopular with most of those likely to vote for his party. Nonetheless, it seems likely that the party will be used in the European elections as a means to protest against the existing order.

For sections of the working class that will include protesting against Labour. Jeremy Corbyn, launching Labour's European election campaign, declared that: "The real divide in our country is not how people voted in the EU referendum. The real divide is between the many and the few. Whether you're from Tottenham or Mansfield, Stockwell or Stoke here in Medway or Manchester so many of the problems you face are the same."

This approach, of emphasising that the real divide in society is between the majority and a tiny capitalist elite with enormous wealth, has the potential to win workers who voted both Leave and Remain. To do so, however, it has to be linked to a clear and determined campaign to fight for a programme in the interests of the working class majority.

Such a programme could use the 2017 manifesto as a starting point but would also include, for example, reversing all cuts to council services, scrapping universal credit, and a pledge to nationalise Honda Swindon under democratic working class control, along with any other companies who carry out closures and job cuts in the name of Brexit or otherwise. This should be combined with nationalisation of the major corporations and banks to take the levers of power out of the hands of the capitalists, who will inevitably attempt to sabotage a Corbyn government. Linked with a manifesto for a socialist Brexit this approach would be able to enthuse the working class in Britain - both those who voted Leave and Remain - and make a very effective call for international solidarity with workers across Europe.

Unfortunately, however, at this stage Corbyn and the left Labour leadership are not conveying a clear message to working class voters. A central reason for this is their continued mistaken attempts to compromise with the pro-capitalist Blairite wing of Labour - whether that is the local Labour councils cutting public services, or the Blairite MPs fighting for Labour to be seen as the party which defends the EU bosses' club.

Corbyn's approach to the talks with May, for example, should have been to forcefully declare his own red lines - demanding the repeal of all anti-trade union legislation and all neo-liberal pro-privatisation rules, for example, and refusing to countenance any deal which did not include agreement on these and other pro-working class measures. Instead reports from the talks have focused overwhelmingly on the Blairite demand for a second referendum, inevitably giving the impression to many Leave voting workers that Labour is not fighting in the interests of working class people and is instead focused on 'reversing Brexit'.

It is impossible to predict how the parliamentary deadlock will be broken beyond the European elections. Clearly a general election is posed. Notwithstanding the current ebbing of enthusiasm for Corbyn among many working class voters, big sections of the capitalist class remain frightened of the possibility of a Corbyn government. They could be right! In the snap election of 2017 it is estimated that a million Ukip voters switched to Labour. This could be repeated on a bigger scale next time. However, this is far from guaranteed. If Corbyn allows Tom Watson, Keir Starmer and co. to influence the manifesto and the approach to Brexit, Labour might go down to defeat despite the Tory party's profound crisis.

The workers' movement, however, has to urgently organise a fight in defence of the interests of the working class. This includes campaigning to get rid of this rotten Tory government, but also preparing for the challenges of Corbyn coming to power against a background of capitalist economic crisis and dislocation. Even if Labour was to win by a landslide it would be, as things stand, in reality a kind of coalition government - of the Corbynites and the pro-capitalist wing of Labour, whose role would be to act as agents of the capitalist class and prevent any radical measures in the interests of the working class being taken.

Attempts to mollify both the capitalist class and their representatives in the Labour Party would inevitably lead to the betrayal of the interests of the working class majority. However, we should not underestimate the enormous enthusiasm - after a decade of Tory austerity - that would be engendered by the election of a Corbyn-led government and could be mobilised to oppose the capitalist saboteurs and their system.