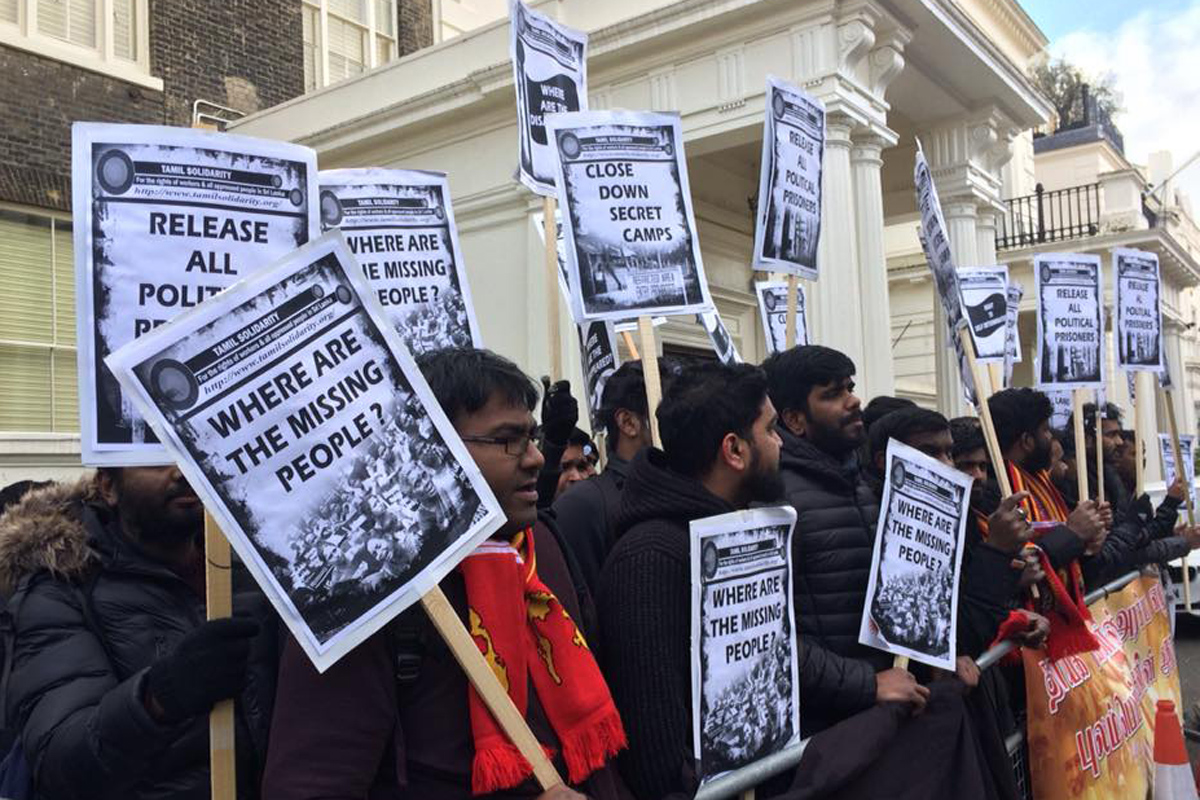 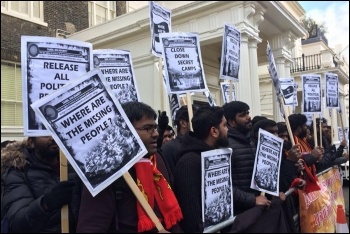 TU Senan, Tamil Solidarity and Committee for a Workers’ International

Thirty years of war in Sri Lanka came to a brutal end on 18 May 2009. In their final act of barbarity Sri Lankan government forces surrounded over 300,000 people fleeing the war, forced them into a tiny lagoon called Mullivaikal and bombarded them. Over 140,000 perished in a few days and tens of thousands are still ‘missing’.

The scale of destruction and death has had a shocking impact among the approximately three million Tamils, the main minority population in the island nation.

All the key leaders of the Liberation Tigers of Tamil Eelam (LTTE) – a separatist organisation that waged an armed war against the Sri Lankan government for decades – were also killed in the last phase of the war.

While the armed clashes ceased, those conditions that gave rise to the war have not.

The government has shown no interest in satisfying basic demands such as adequate compensation for the victims; release of occupied land; finding information about the forcefully disappeared; the release of political prisoners, and so on. Bringing justice to the victims or taking action against the war criminals and those responsible for the killings remains a far cry.

While tens of thousands of Tamils across the world are mourning their dead, the Sri Lankan government celebrates it as a victory. In a statement released by the 2009 defence secretary Gotabaya Rajapaksa on social media he said he had watched the end in Mullivaikkal with a “sense of quiet joy” and bragged about “annihilating terrorism”.

Today, war criminals are paraded as “war heroes” and many have been promoted. Even those named in United Nations (UN) reports as war criminals have been allocated to organise ‘war hero days’.

The current president of Sri Lanka, Maithripala Sirisena, opened a new monument to mark the celebration of the “war heroes” on the remembrance day.

In the last ten years there has been major factional struggles and manoeuvring in the government – with hopes among the population that changes in the regime would bring justice.

But they have been dashed by experience. Now many Tamils cannot see a solution via any Sri Lankan government.

The hopes that the main Tamil parties, such as the Tamil National Alliance (TNA), would fight for their interests have also been crushed as they continue to collaborate with and protect the Sri Lankan government.

The TNA and the majority of the self-proclaimed Tamil leaders continue this failed method with the promise of winning concessions.

But in the seven decades of Sri Lankan independence a pattern has emerged. Unstable capitalist governments have whipped up hatred against the Tamil minority in a bid to secure and consolidate their power. They base themselves on Sinhala Buddhist nationalism to woo support among the majority Sinhala population.

On the other side, in opposition to the Sinhala nationalist oppression, Tamils’ demand for equal rights and better conditions have fed into the national aspirations of the Tamil masses.

The demand for separation remains strong. In fact the brutal war and the ongoing oppression has further increased the polarisation that exists among the Sinhala, Tamil, and Muslim populations.

Sinhala workers, youth, and poor people have seen none of the ‘peace dividend’ promised them during the war.

Now, International Monetary Fund-led privatisation measures are threatening the free education and health services that have been the proud possession of the masses – won through intense class struggle in the past. The government whips up hatred against the minority to justify the ongoing attacks on living standards.

Clearly, on a capitalist basis, the outstanding ‘national question’ in Sri Lanka cannot be resolved. Only the development of mass struggle among the working class of all population groups against the capitalist system can offer a way forward.

Such struggles could facilitate the rapid building of a mass socialist party to break with capitalism and implement democratically agreed measures to achieve peace, increased living standards, redistribution of land, and self-determination.

The fragility of the peace was revealed in the latest terrorist bombing that took place on Easter Sunday. The government declared a state of emergency and introduced a number of repressive measures against the Tamil-speaking Muslim population. Attacks by organised mobs on the Muslim population take place under the watchful eye of the armed authorities.

Out of desperation, there is a widespread hope that western governments and international institutions such as the UN will deliver justice. This is mainly due to the propaganda of the majority of Tamil leaders that the ‘only credible path’ to achieve justice is through a so-called independent international investigation.

However, the failures of western capitalist states and their institutions are very well recorded. In the name of maintaining ‘neutrality’ the International Committee of the Red Cross (ICRC) packed up and abandoned people in the middle of the 2009 attack.

Both the Indian government and western governments, including Britain, maintained arms sales to Sri Lanka throughout the war – and to this day.

This doesn’t stop right-wing politicians in countries with significant Tamil populations, like Canada and Britain, paying lip service to Tamil rights with the cynical aim of securing their votes.

This amounts to demanding the Sri Lankan government establishes some sort of “reconciliation mechanism”, and is mainly to avoid any future opposition that may emerge among the Tamil population.

But while the oppression continues, these state forces will not be able to hold back the struggle from emerging again.

The success of a fightback, however, depends on what ideas it is organised around. A section of young people and students in Sri Lanka released a statement this year calling for Mullivaikal to be an “awakening day”. This day should be a mass mobilisation day.

Public discussion on what perspective and strategy should be adopted is needed, starting with rejecting all capitalist governments and instead seeking allies among workers and revolutionary organ-isations to build a successful fightback.

Unfortunately, the current so-called Tamil ‘leaders’ are an obstacle to such an approach. In the diaspora, the majority of the leaders subscribe to right-wing ideas, including support for the Conservative Party in Britain.

They try to trick Tamil workers and youth, suffering and angry at Tory policies, into believing that “we’re all conservative”.

At this year’s main remembrance event what was the leading diaspora organisation ten years ago could not muster 200 supporters – compared to the thousands of previous years. Instead of an appeal to working-class people, they attempt to make shortcuts and appeal over workers’ heads to the government and MPs (a long list of Tory, right-wing Blairite Labour, and Lib Dem MPs were invited), even playing the British national anthem!

Long-time supporter of the Tamil cause shadow chancellor John McDonnell only got to speak after several Tories who promised nothing.

In an interview given to Tamil Solidarity in the past John McDonnell stated that if Jeremy Corbyn come to power they will stop all military assistance to Sri Lanka. But this year even he stuck to the tune of “delivery of justice” via all groups coming together.

The Labour, Conservative and all the other main parties were enthusiastic to speak this year mainly because they are in the middle of a European election campaign.

The majority of these MPs voted for cuts in services, for war in Iraq, for the bombing of Syria and many other brutal domestic and foreign policies. Their main aim is to fight for the ‘Tamil vote’ which they hope the ‘leaders’ can deliver en bloc.

Almost all of them carried the same message – that they are for “peace and justice” but with no explanation of what that means and how, ten years on, it can be achieved when so far their annual speeches have achieved precisely nothing for Tamils in Sri Lanka.

On 18 May Tamil Solidarity, founded in 2009 on the idea that the struggle for Tamil rights must go on, offered an alternative. Words are not enough – we demand action. We should mobilise and build our strength by linking up with the working class in struggle.

The Tamil Solidarity campaign rejects all capitalist governments and all those who support any form of oppression. Tamil Solidarity instead calls for an alliance with trade unions, socialists and young people.

In the past years Tamil Solidarity has won the national affiliation of trade unions Unison, PCS, Nipsa and many union branches. Tamil Solidarity also joined forces with the fightbacks of workers and youth that have taken place in Britain.

It is through these actions that we aim to build the struggle of the Tamils. The Socialist Party has assisted the work of Tamil Solidarity from its founding meeting and maintains close collaboration on various struggles. Socialist Party members from various national backgrounds took part in the Mullivaikal remembrance day events.