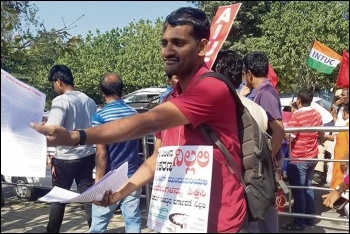 Prime Minister, Narendra Modi and his party have scored a second general election victory. Given the tumultuous period of the last five years under Modi's governance it was expected that at these 2019 elections the BJP would find it difficult to sell its divisive 'saffron' agenda based on reactionary Hindutva ideology.

Voters in fact boosted support for the BJP to 38%, resulting in 303 seats - compared with 31% of the popular vote in 2014 and 282 seats. Unprecedentedly, the BJP got more than half of the votes polled in at least 13 states.

Narendra Modi is the first prime minister to return to power winning a bigger vote share for the party and enjoying a full single-party majority in the Lok Sabha parliament since Jawaharlal Nehru's victory in 1957!

In a country as ethnically diverse and as vast as India - a population of 1.34 billion spread over 29 states - parliamentary democracy can hardly be stable. In the daily lives of people in the previous five years under Modi's 'democracy', social harmony was conspicuously scarce.

In state after state, especially in the Hindi belt, the religious minorities and oppressed castes were at the receiving end of his brutal policies - socially very regressive, with mob lynchings, vigilante attacks on Muslims and Dalits for the crime of eating beef, and young people getting publicly reprimanded by the "cultural police" for the way they dress, talk or even for just having a life.

The Gau Rakshak Dals (Cow Protection Force) has terrorised people, particularly Muslims. Flash mobs would appear from nowhere and 'street justice' was dispensed, often creating an atmosphere of fear and terror, while the state and its agencies were either pliant onlookers or lending a hand to give a tinge of legitimacy.

Thus, the idea of Hindu majoritarianism was constructed and kept alive, as some kind of non-state authority to police the people and to keep their conscience in line with the untold and unprescribed tenets of the Hindu Rashtra.

Incumbency often plays a negative role in Indian elections, mostly with the incumbent leader or government being punished. But this time, as an exception to this rule, the return of Modi has shattered those predictions.

Given Modi's dismal performance in the last five years, particularly in not creating jobs and livelihood opportunities for the youth or carrying through meaningful reforms for distressed farmers, it was difficult to foresee such a massive victory for him and his party.

We were cautious in our predictions and wrote: "Though it would be the worst outcome from a socialist and working-class point of view, it is most likely that Modi's BJP will return to government, albeit with a reduced majority, for want of a credible alternative."

In the first two decades of the 21st century, owing to the acute crisis of capitalism globally, we have seen the rise of many far-right political parties, even gaining power through the parliamentary route.

Right-wing populist and nationalist governments are in power in Russia, Turkey, Israel, Hungary, Poland, and the United States and they share power with left-wing populists in Italy. In that context, the advent of Bolsonaro of Brazil and the

increasing possibility of the return of Mahinda Rajapakse's camp in Sri Lanka is something of serious concern for the populations of the neocolonial world.

Now, the massive victory of Modi and the BJP on a very clearly jingoist and religious majoritarian agenda poses a grave threat to the entire region. There is a huge pile of nuclear arms and installations in this highly tumultuous area, with contentious geopolitical issues.

We had the horrific rhetoric of Modi during his electioneering speeches saying "Ghar mein ghus kar marenge" (We will enter your homes to beat you up) and boasting that the Balakot airstrikes into Pakistan were a counter-response to the terror attack in Pulwama (Indian controlled Jammu and Kashmir), which killed 40 soldiers.

The rise of Modi's regime is not an accidental phenomenon. But what is unique to the BJP's rise is its methodical and nurtured growth in the last two and a half decades from a 7.74% vote share to 38% today.

Secondly, unlike other far-right formations, the BJP cannot be viewed as just another right-wing political party.

It has an organic association with RSS (Rashtriya Swayamsevak Sangh), its patron and "conscience" keeper. The RSS unabashedly and unapologetically prides itself in setting out to build Hindu Rashtra (Hindu Nation).

Most importantly, unlike other political organisations, the BJP has an unending supply of Hindutva fly-by-night organisations who will carry out the dirty work of assassinations, riots, rapes and communal pogroms on behalf of the party and in most cases the party can distance itself from any accountability.

This has been practiced to perfection right from the period of India's independence from British imperialism. Nathu Ram Godse, the assassin of MK Gandhi (aka Mahatma Gandhi) was also part of the inner circle of the RSS but had developed "differences" with the organisation just in time for the RSS to be absolved of all responsibility.

Undoubtedly this election, just like the previous one in 2014, was highly polarised from the point of view of the rest of the opposition.

Modi and the BJP did set the agenda and the opposition popularised it by attacking it with as much vigour as they could muster. Thus the entire opposition - be it the Congress Party or others - were caught in the trap and did not raise other real issues of concern for the vast majority of the population.

The demonetisation and Goods and Services Tax fiascos of the Modi government, which were originally meant to be great achievements for the Modi regime, were never even mentioned by the BJP stalwarts in their electioneering. But even the opposition treated them as secondary issues and did not take them up in earnest.

Instead, Modi, the main star campaigner for the BJP, went full steam ahead with nationalism, terror threats, 'strongman' government and so forth. He even used the Easter Sunday terror attack in Sri Lanka's capital to make anti-Muslim propaganda to his advantage.

The landslide victories of the BJP under Modi has to be contrasted with the pathetic and progressive downward slide of the traditional left, led by the Stalinists and Maoists and the withering away of social democracy.

After the 2014 elections we wrote that the left was a footnote, but this time round the left is not even a blip on the landscape in its traditional strongholds of West Bengal, Kerala and Tripura.

In all these states, the Communist Parties (CPI and CPI(M)) have been wiped out except for one seat in Kerala. Their saving grace was that in Tamil Nadu both the CPI and the CPI(M) won two seats each, courtesy of the alliance that was cobbled together with them by the Dravida Munnetra Kazhagam and Congress. One progressive feature of Tamil Nadu is that voters did not allow the divisive and communal BJP to get anywhere.

Modi's victory exposes the weakness of the opposition in general and the political parties on the left in particular, who have learned nothing from history.

The programme and strategy of 'lesser evilism' adopted by the left - cosying up to regional capitalist forces in the name of them being 'progressive', 'secular' and 'democratic' - has disastrously dampened down the combativity of workers and poor people to struggle against communalism, casteism and capitalism.

The clear choice made by former CPI(M) supporters and left 'intelligentsia' in West Bengal, to vote for the BJP rather than their own party or the Trinamool Congress, is the logical result of the Stalinist party leadership's bankrupt politics.

The massive victory for the Modi-led far-right in India is the result of ideological disarray on the left and represents a huge set-back to Marxist and socialist fighters.

Consequently, the task becomes yet more urgent to build a genuine and real socialist alternative, not only to the current regime of Modi, the BJP and the RSS, but to defeat the forces of capitalism and casteism in India.

Working-class potential for change was shown in January 2019 when the trade unions call for a general strike against unemployment, poverty pay and other social issues saw up to 200 million workers respond - the largest general strike in history!

A fighting socialist programme based on an independent class alternative is needed and building a powerful mass working-class and poor people's party.

It will also need to inscribe on its banner zero-tolerance towards discrimination of all shades based on religion, region, language, gender and most particularly the caste discrimination. This is the need of the hour.