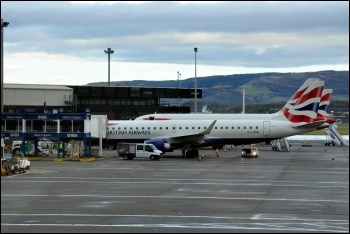 Mechanics, firefighters, security, admin, car park attendants are all fighting together. One picket told Socialist Party Scotland that airport owners make massive profits and have "engineered the disputes to try and break the union as they are ideological capitalists".

Unite's planned programme of strike action and an overtime ban up until October is a response to massive attacks by airport bosses AGS: a paltry 1.8% pay offer, really representing a pay cut, is combined with the closure of the final salary pension scheme.

A Unite spokesperson said: "Multiple times this week, Unite has requested to meet with management to seek to remedy the dispute. This has been met with a wall of silence. We cannot stand by while the boardroom of AGS enjoys pre-tax profits of £91 million, and let them close our pension scheme.

"We continue to call for further negotiations to end the dispute, but we have been ignored and will be continuing with our action until we are heard."

This shows workers' action gets results and that if trade union leaders call action workers respond. The national and Scottish Trade Union Congress leaderships should take note and call co-ordinated action for pay rises to meet the cost of living, stop attacks on pensions and jobs and end austerity.