Link to this page: https://www.socialistparty.org.uk/articles/29315 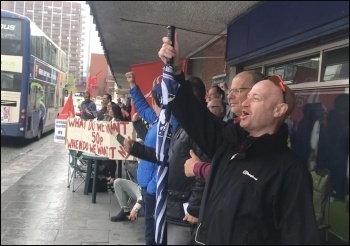 Around 150 drivers and supporters gathered at Preston bus station on Tuesday 25 June for the ninth day of strike action against Stagecoach. This was matched by a similar picket at the Chorley depot.

As of now, drivers in Preston and Chorley can receive up to £2 an hour less than those in other areas of the north west. Years of unequal pay and stagnant wages has left drivers with no option but to fight for a 50p per hour pay rise.

So far, the company has offered a measly 3p an hour rise over three years. As Unite branch secretary Peter Winstanley put it: "Stagecoach sees us as being only worth a penny per year".

Needless to say, the drivers were not impressed, and came out of talks more determined to win their demands than ever, with the support of staff in Preston's other bus franchise.

Stagecoach management has tried to appear confident, shipping in teams of scab drivers from across the country to be paid much higher wages, bribed in cash and housed in luxury all-inclusive hotels. Strikers have heard reports of commuters suffering as a result of the company's actions - the scabs are failing to take on passengers at every stop!

The Preston and Chorley bus drivers have drawn the support of the wider trade union movement. Dave Beale, chair of the Unite Community Lancashire branch, said: "It's disgraceful the way the drivers have been treated by Stagecoach. But the strikers are a brilliant example of how to fight and they have 100% support from my branch".

The drivers are prepared to continue their strike action until Stagecoach meets their demands. They have drawn up plans for another 15 days of strike action going into late July.

Socialist Party members will continue to show support on the picket lines to see this dispute through until the end.

This version of this article was first posted on the Socialist Party website on 26 June 2019 and may vary slightly from the version subsequently printed in The Socialist.