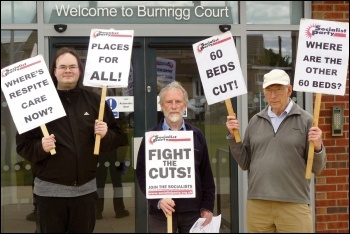 They had invited the media to celebrate the official opening of a new care home without mentioning that it had only 60 beds to replace the 120 beds lost when they closed down three other homes in the city.

Despite us presenting a petition from 1,500 people opposing these cuts to the cabinet two years ago, they didn't inform us of the opening, but we still got our message out on the front page of the local paper and on the regional TV news.

Across the county the coalition has cut the number of residential places for elderly and vulnerable people from 257 to just 120. They have also presented the improved en-suite facilities in the new home as their 'trail-blazing initiative', rather than having to catch up with national standards of the Care Quality Commission.

The responsible cabinet member told us that demand for places had fallen. But families had told us how they had been refused places, and staff at another home told us how it had been deliberately run down to become left "half empty".

The cabinet member also claimed that it didn't matter if capacity was cut because they work in partnership with the private sector - in other words, this is privatisation and outsourcing. The previous portfolio holder was Labour, this replacement is a Lib-Dem, but as she herself said "what difference does it make?"

Instead of telling local people the truth - that these cuts are a consequence of Tory government austerity and mobilising for a general election - they have presented this regression as progress. In effect they are acting as a cover for the Tories, minimising how damaging they are and reducing the chances of electing a Corbyn government which could stop the cuts.

We are now demanding two additional care homes in Carlisle and west Cumbria to restore the previous provision, and for more and better trained, better paid carers for longer home visits.