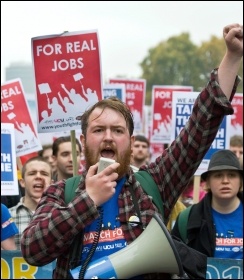 My current employer has not given its workforce a pay rise in over three years. The health and safety regulations are breached on a daily basis.

And employees often get bullied by the incompetent management which chooses to blame the workers instead of taking responsibility for its countless mistakes.

But when we come together, workers can change those things. Collective protest, and strikes if necessary, can force employers to improve our conditions. This is the potential power of a union.

As a young worker in a small, non-unionised workplace, it is easy to become isolated and feel detached from the trade union movement. Yet so many workers today face similar circumstances.

We are employed in precarious working environments with no union recognition: in the hospitality sector, small businesses, and other workplaces of every type across the country. It can be easy to forget that people of all ages face the same struggles on a daily basis.

This is why the National Shop Stewards Network (NSSN) conference (see box) is so important for me. It allows me to meet other activists who have similar situations. It lets me interact and share experiences, ideas and strategies regarding workplace organisation with others from across the country.

The NSSN aims to bring together the very people on the front lines of industrial struggle, across different sectors and unions, and be able to cooperate and coordinate with one another.

If you are a young worker like myself, whether in a union or not, and looking for ideas on how to take on the bosses, there is no better place to find out more than the NSSN.

And by building a coordinated fightback among organised workers, we can go further. We can use the power of joint strikes and mobilisations to push out the Tory government, fight for socialist policies, and begin a movement to put working-class people in control of society instead of the capitalists.