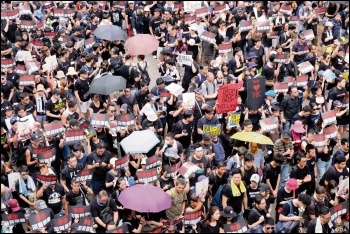 An unelected prime minister suspends parliament for weeks. The Tories remain in office despite a huge political crisis and splits in their own party. Working-class people continue to face attacks on their living standards at the hands of the super-rich. What can be done to change all this?

Decisions about Brexit, jobs and services go on over the heads of working people. How is it possible for us to influence what happens?

One thing is for certain, we can't just rely on MPs and parliamentary manoeuvres. Do we have the power to do anything ourselves as working-class people? The Socialist Party says emphatically yes!

When we organise and mobilise in large numbers, we can change things. When millions move, then governments and leaders can be brought down.

On BBC Newsnight, left journalist Paul Mason referred to the Poll Tax protests in 1990 that defeated a massively unjust tax and ultimately brought down Tory prime minister Thatcher. The Socialist Party is proud of the role that we played - as Militant at the time - in that movement.

But it wasn't just the massive demonstrations alone that won. Nor was it 'riots' that took place when a demonstration was attacked by police in Trafalgar Square.

It was a sustained and organised mass campaign of civil disobedience, the mass non-payment campaign proposed and initiated by Militant supporters. At its height 18 million people were defying the law and refusing to pay.

It was the organisation of that movement and clear ongoing tactics and strategy that succeeded. Many different types of tactics in struggle have been used in the past: protests, rallies, marches, occupations of different kinds, road blockades.

The climate campaigners Extinction Rebellion hit the headlines recently with their campaign of civil disobedience, but none of these methods are new. All of these can be valid as long as they are part of a strategy aimed at widening and building a bigger movement.

A couple of years ago in my own area, Leicester, we won a victory against the proposed closure of the Glenfield Children's Heart Centre - the only one in the whole east Midlands. Local demonstrations of 2,000, numerous protests and other methods involving tens of thousands, succeeded in forcing a u-turn by NHS England and the government.

On different issues, differing scale of struggle is needed - a national battle will need more.

Thousands took part in protests against the suspension of parliament by Boris Johnson. That was a start.

This kind of call could potentially mobilise millions onto the streets. Clear leadership can transform the mood of those who currently feel powerless.

The potentially most powerful force in society is the working class, organised in the workplaces. It's here that bosses can be hit in their profits and huge pressure can be brought on governments.

Every sector has its reasons to fight. Pay has been cut, jobs lost, services slashed and privatised, working conditions attacked.

Already there are a number of strikes taking place around the country. If all these grievances were pulled together and coordinated action took place, it would take the battle against the Tories to a higher level.

The occupation at the Harland and Wolff shipyard in Belfast to save jobs could even be extended to other workplaces where jobs are threatened.

Action in the workplaces can also be linked to the wider community - over issues such as attacks on benefits and cuts in services - drawing bigger numbers into in mass demonstrations and other protests.

The movement needs a strategy - an aim and an idea of how to achieve it. But it also needs a programme - demands that link to the needs of working-class people.

That is why we call for a general election and the coming to power of a Corbyn-led government with a socialist programme.