Link to this page: https://www.socialistparty.org.uk/articles/29572 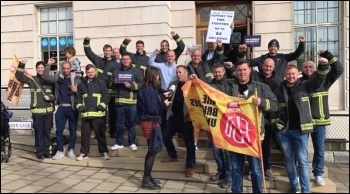 A press release from the South Yorkshire FBU secretary

As a trade unionist and socialist nothing hurts more than cuts to public services. In the period since 2010 South Yorkshire Fire service has lost 34% of its funding.

Increases in attendance time to incidents, reductions in control room staff and the overall firefighter establishment, have been the impact of Tory-driven austerity.

However firefighters have claimed an ecstatic victory in their fight against cuts to South Yorkshire Fire and Rescue Service (SYFRS).

Instead, the fire authority agreed to use its reserves to maintain safe crewing levels while lobbying central government for investment in the service.

A rally outside Sheffield town hall in June saw 200 firefighters protesting against the proposals. Around 10,000 people signed a public petition backing the FBU's campaign against the cuts.

"We're ecstatic that the Fire Authority has rejected these unacceptable cuts. South Yorkshire firefighters are committed to keeping the public safe, and these proposals would have seriously undermined our ability to do so.

"South Yorkshire Fire and Rescue Service has been consistently underfunded by central government. It is positive that the fire authority has decided to halt the cuts, but we need fairer funding for our service.

"The fire authority must go to the government and demand adequate funding so that we can provide a safe service to local communities.

"We'd like to say a huge thank you to members of the public, local Socialist Party activists and the Labour and trade union movement for their unwavering support.

"It's thanks to them and the hard work of FBU members that we've been able to win our campaign and continue to keep South Yorkshire safe."