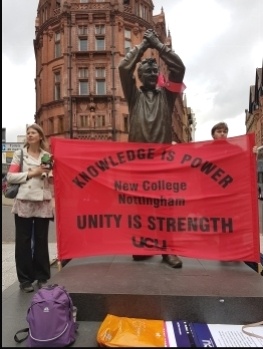 On 11 September Nottingham College UCU strikers from various sites around the city along with trade unionists and some students congregated for a rally after the morning pickets at the Brian Clough statue in the city.

It was to show their determination to defeat the college employer's draconian contract - involving savage cuts in terms and conditions and with pay cuts for 20% of teachers.

In July 2017, John van de Laarschot, the Chief Executive of the college had written an article that appeared on the Nottingham Post (NottinghamshireLive) website - an article that brought to mind the attitude of Margaret Thatcher.

It was headlined: "Our students need tough love, says boss of Nottingham's biggest college" Clearly, "tough" is also being applied to the staff.

This from a Chief Executive whose salary in 2017-18 was £207,000 (Education and Skills Funding Agency data) and where the college also employs a 'Principal'. Having both roles is unknown in a Further Education college, according to strikers.