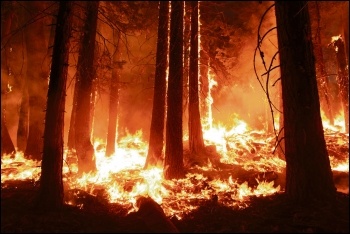 Profit is driving the climate crisis, photo by USDA/CC   (Click to enlarge)

Recent images of the Amazon rainforest ablaze highlighted the scale of change currently underway. At the height of the fires, an area the size of a football pitch was destroyed every minute.

Greenland's ice sheet alone has lost three and a half trillion tonnes since 2003 - enough to raise sea levels worldwide and affect those living in low-lying areas.

Those most at immediate risk from rising sea levels are in some of the poorest countries internationally.

Moreover, left unchecked, this will lead to cities in Britain being permanently flooded within the lifetimes of school student climate strikers.

Climate change is already happening. If the destruction continues, the various processes being unleashed could reinforce each other, leading to exponential increases in the rate the climate changes.

Why is this happening now? A portion of the Amazon fires were started deliberately, to clear space on the fertile land for farming. One rogue individual doing this is a bad apple - but the scale of deliberate arson is something more. It is systemic.

Burning forests and melting icecaps are just the visible symptoms of climate change. Global warming - an underlying factor in many of the ongoing changes - is related to the amount of carbon dioxide and other greenhouse gases in the atmosphere.

The link between rising CO2 levels and global temperature increases was first demonstrated in 1938. Then, Guy Callendar showed that this process had been underway since the industrial revolution.

Scientific advances in the intervening 75-plus years have only deepened and reaffirmed that basic analysis.

Scientists are debating whether to mark the industrial revolution as the start of a new geological age, on the scale of the Jurassic era.

The name they are proposing, the Anthropocene, means the age of humanity. Global warming due to human actions is a key factor in the developing fundamental shifts underway in the earth's systems. But the scale and pace of the changes unfolding all around us mean that we cannot just place the blame on individuals.

It is undoubtedly true that reactionary politicians - such as Bolsonaro in Brazil, Trump in the US and Johnson in Britain - allow, and even encourage, environmental destruction to continue. But this is a far more deep-going process than just the recent success of right-wing populists, and predates them by centuries.

In this 'age of humanity', our society has reached the level that puts us in the environmental driving seat.

Collectively, humans are in the process of reshaping the world in our image, and have the technology to direct the future, not just for humanity, but for all life on earth.

The decisive factor is whether that future is consciously shaped to rebalance natural systems, or blindly stumbling towards catastrophe. The organisation of human society will ultimately decide which road we embark on.

Presently, worldwide, society is organised around the profit motive. The vast majority will, do, or have worked for a living.

The results of our work are transformed by employers into capital, of which we receive a fraction as wages. The bulk is claimed by businesses as profit. Government employees, to varying degrees, fulfil various duties necessary to maintain this system. Governments, legal systems, the armed forces and so on broadly act in the interests of 'their' domestic ruling class.

Despite record Amazonian fires, the Brazilian government has issued fewer fines than in previous years. The melting of the icecaps covering Russia's northern coast revealed five previously unknown islands, such was the scale of the ice's retreat this summer. The Russian government's response? To commission icebreaker ships to keep the water clear, to improve access for trade.

Worldwide, since 1988, just 100 companies have been responsible for over 70% of the world's greenhouse gas emissions.

Going further back, research in the Climate Change journal stated that just 90 companies produced 63% of the cumulative global emissions of carbon dioxide and methane between 1751 and 2010 - and 30% of emissions came from the top 20.

These included BP, Chevron, ExxonMobil, Royal Dutch Shell, Gazprom, coal producing companies and others. Both the emissions of these companies, and their status as some of the most valuable companies in the world, is no coincidence.

The system which dominates society, the capitalist system, 'comes dripping from head to toe, from every pore, with blood and dirt' (to paraphrase Karl Marx). The capitalist system ultimately prioritises the profit motive above all else.

The consistent failure of the United Nations climate talks is a clear example of the priorities of the representatives of capitalism.

The first Earth Summit took place in 1992. In the subsequent two decades, CO2 emissions increased by 48%, and have continued to rise since.

In the same period, we have seen the widespread adoption of computers, the internet, the development of mobile phones, the construction of the ISS manned space station orbiting the planet, and the creation or rapid growth of seven of the top ten biggest companies in the world.

The most comprehensive climate agreement coming from the United Nations talks was the Kyoto agreement in 1997. This agreement, effective between 2005 and 2012, proposed market incentives to reduce CO2 emissions (or its equivalent).

Riddled with loopholes, Kyoto did not halt climate change - CO2 emissions rose during its period on the statute books. The United States, acting in the short-term interests of the US capitalist class, simply refused to enact Kyoto.

In roughly the first two decades of United Nations talks, the US was the world's only superpower. Globalisation meant that the world economy was becoming more interconnected. If a lead had been given by an American government in this period, decisive action may have been possible.

Today we face a different picture. The leading authority of the US has disintegrated, personified by the present ill-tempered president. Trade wars between capitalist states show the growing international divisions.

Parliament has been suspended because of the crisis in trade relations between the UK and the 27 European governments, organised as the EU. The world is moving towards increasing international division, not cooperation.

To tackle a worldwide threat such as global warming requires worldwide action and cooperation. China - despite topping the world in air pollution and carbon emissions - leads the world in the development of green energy.

The technology that exists, as part of an international plan, could rapidly reduce CO2 emissions and begin rebalancing the natural systems of the planet. However, a trade war with the US will hinder that technology being adopted.

The US government on its part acts to defend its own capitalist class; both major fossil fuel exploiters such as ExxonMobil and home-grown green tech companies such as Elon Musk's Tesla.

The ultimate question comes down to profit and the potential for growing markets. A consequence of this desperate search for profit means that each company has to reinvent the wheel in terms of developing and implementing new technologies; knowledge is not shared but divided up and its proprietary guarded.

The massive duplication and waste further holds back implementing the necessary changes. Starting from scratch, and the duplication competition requires, necessitates large-scale investment.

This is - in the long term - even more damaging than fanning the flames of rainforest destruction.

Escalating climate catastrophes could well provoke a desperate change of course for capitalism. However, there is a significant delay between the causes and the effects; possibly decades.

Halting all CO2 created by humans tomorrow - an impossibility - would not stop capitalism's cumulative effects being felt decades into the future.

The Stern report in 2006 concluded that climate change was "a result of the greatest market failure the world has seen". Whether it is deliberate destruction or dismissive inaction, the experience of modern-day society can be summed up in two words - capitalism destroys.

This system's faultlines were blown open in the minds of millions by the economic crisis of 2007-08, which showed that when the rich fail, workers and young people pay the price.

In the decade since, we've seen that lesson lead to a search for a solution, and the re-emergence of left-wing politicians such as Jeremy Corbyn in Britain.

One of the actions of this emerging left was the proposal for a Green New Deal by Alexandria Ocasia-Cortez in the US Congress. The basis of this - and other similar schemes - is accepting that business alone will not halt global warming.

Therefore, state action is necessary. The bill failed - a clear indication of the outlook of the majority of US politicians.

But state intervention is absolutely necessary. Pooling the vast resources available and employing the best techniques developed is the quickest and more surefire way to avert a catastrophe.

The capitalist class, and the capitalist state, will not allow this. The interests of a tiny minority stand at the head of society, rooted in a system organised to defend their class above all else, which on the present course will drive the planet's natural systems beyond the point of no return. That system needs to be fundamentally eradicated.

Socialism means a complete overhaul of society. It means removing the profit motive, allocating resources democratically on the basis of need and respecting the environment.

It means ending natural and artificially created waste and duplication, organising production to ensure what we create is for use. It means getting rid of the rule of the 0.1% here and internationally.

Socialism is the conscious recognition of the current situation. Humanity determines the future of the Earth's natural systems.

Capitalism is blindly stumbling towards ecological crisis. Socialism would actively seek to implement a plan, rebalancing natural systems to build a harmonious future for all life.

Planning for the Planet: How Socialism Could Save the Environment by Pete Dickenson

The bookshop of the Socialist Party