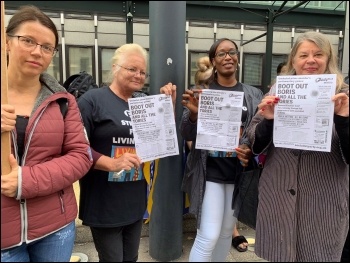 Members of the PCS civil servants' union are continuing their indefinite strike at the Business, Energy and Industrial Strategy (BEIS) government department in Westminster over implementation of the London Living Wage (£10.55 an hour) and decent terms and conditions. The workers have been out since 15 July.

It's reported that management has conceded the living wage, but other issues remain outstanding. Moreover, no offer has yet been put to the strikers.

The outsourced catering and cleaning workers at BEIS are employed by contractors ISS and Aramark.

From 2 September to 13 September they were joined by receptionists, security guards, porters and post room staff also employed at BEIS by ISS and Aramark.

From the week beginning 30 September, these workers will take rolling strike action of one week on strike and one week off.

Socialist Party members both in the PCS union and in London are continuing to give full support to the strikers.