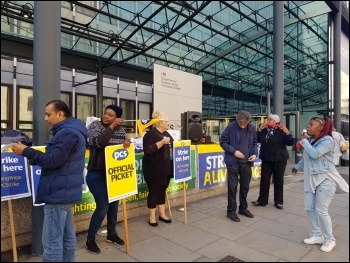 PCS union members continuing their strike action for pay justice and to be brought back in-house at the 'Business, Energy and Industrial Strategy government department, photo London Socialist Party   (Click to enlarge)

Last week's decision by the leadership of the Public and Commercial Services (PCS) union to recommend to members in England and Wales that they vote for all Labour candidates without qualification in a future general election could prove to be a damaging mistake, coming hard on the heels of further moves against Jeremy Corbyn by the right-wing Blairites at this week's Labour Party conference.

The move to uncritical support for Labour candidates was pushed by general secretary Mark Serwotka, on the grounds that there could be a general election before the end of the year.

Socialist Party members on the NEC and some independent supporters of the Broad Left Network opposed the decision as precipitous, taken without knowing the content of Labour's manifesto, and without waiting for the completion of a national consultation on the union's political strategy that had been agreed by the Annual Delegate Conference in May.

Socialist Party members in PCS support the election of a Corbyn government. What we do not support, and do not believe the union's members or activists would support, is the use of union resources to support Blairites such as Tom Watson, Stephen Kinnock or Wes Streeting, who have done everything possible to undermine Corbyn and his anti-austerity policies.

We pushed for rigorous scrutiny of the record of any candidates that union branches sought to formally endorse at the next election, which would have been in marked contrast to what happened at the last general election in 2017.

Then, in moves that were not well publicised at the time, the union backed Labour MPs such as Luciana Berger along with other pro-austerity candidates who would be quite happy to stick the knife into trade union rights, or into public sector pay and pensions.

Luciana Berger has since resigned from Labour and joined the Lib-Dems, whose role in the Con-Dem coalition, attacking our union, is still in the memory of members and reps.

The Blairites are continually striving to push Corbyn away from the anti-austerity platform he was elected on and towards the political 'centre' (in reality towards the centre-right favoured by arch-privatiser Tony Blair).

Our union has always said that we are not politically neutral, because we fight austerity, we fight for jobs, for universal social security nets, for the tax loopholes exploited by the billionaires to be closed - and for well-paid jobs for our members, to implement this pro-worker agenda. But we are politically independent.

That independence has been cast away in favour of wholesale endorsement of Labour in England and Wales, which has been done without levying a single demand or a single condition on any of the hundreds of parliamentary candidates we will now potentially be supporting.

The civil service faces more of what we have had for the last decade. Job losses, office closures, and pay that is not keeping up with inflation. Pensions that we are paying more for, working longer for and getting less from. Redundancy rights being attacked to make it easier to sack us and close offices, leaving whole communities without accessible public services. We are also likely to face a situation where EU nationals who have civil service jobs face some form of attack.

Fighting against all that should be our focus, including supporting candidates who back our members and our union policies.

Supporting candidates just because they are Labour is going to lead to division among our members and political incoherence, as we back people who are openly campaigning against Corbyn's anti-austerity ideas on the doorstep.

At a time when the unity of the union is so vital, as we build for our third national pay ballot and attempt to shatter the 50% threshold imposed by the anti-union laws, this is a mistake which must be opposed.

Marion Lloyd is standing as a candidate for general secretary of PCS in the union's forthcoming election. She needs at least 15 nominations to get on the ballot paper. Marion is a member of the Socialist Party. Her campaign launch statement can be found here: 'Fighting PCS general-secretary needed - Marion Lloyd: Why I am standing'. Please share and support her nomination #Marion4GS