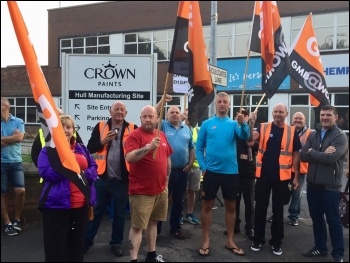 Workers, members of the GMB union, at Crown Paints in Hull have in recent weeks taken four days of strike action in pursuit of a just pay claim. Shane Allinson, GMB senior steward, has made a statement about the dispute, extracts of which we carry below.

"Crown Paints has made paint and varnishes in Hull for over 200 years. We have a sister site in Darwen, Lancashire, and both sites are covered by GMB and Unite with collective bargaining rights.

In February 2019 the collective stewards of both sites started the annual pay talks, canvassing the members and creating a mandate to take to the company.

The 'wish list' was simple and in our opinion something that could have been negotiated.

The percentage increase started high to achieve a realistic number as most pay awards are. The company responded with 1.9% and discussed away the two other parts of the claim.

The stewards committee agreed that the company offer can't be taken back to the members as it was a derisory figure. We asked the company to go away and consider its position and at the next meeting they came up with 2%. The union group considered its position and made a stance of 3% - that would be the lowest we would go.

A ballot was held on the 2% offer and rejected by the members. The company met with us again and issued a further increase to 2.2% adding this is their final offer.

This was balloted on and again highly rejected which led us to a consultative ballot and thereafter a postal ballot to take industrial action.

The results of the postal ballot were massively in favour of taking action up to and including strike action.

We are asking our friends and workmates to stand by the democratic vote and withdraw their labour. To stand on a picket line and not earn a wage for that day to fight to maintain a differential on our wage packets.

Minimum wages are rising and rightly so, but the differential is getting smaller. Our brothers and sisters over generations have fought to maintain our terms and conditions and now it's our turn.

Our fight at Crown Paints is to stop the pay gap being closed, to stop the influx of temporary workers, to get the business to uphold our rights as a union and not ride roughshod over age-old agreements, to address concerns over health and safety issues and to get the company back to a place where it looks at its biggest asset - us the workers - as part of the family and not just a number."