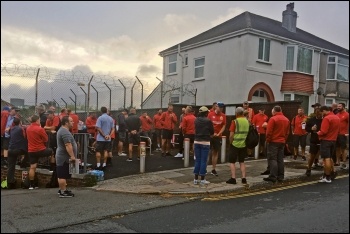 On 15 October the Communication Workers Union (CWU) will announce the ballot result for industrial action over management plans to end Royal Mail group as a real public service. All indications point to a yes vote as big if not better than the 89% yes vote two years ago.

Over several years there has been a number of national disputes, but this is clearly different. It looks like management, under the new CEO Rico Back, is preparing for a bitter dispute but at the same time the membership is clearly supporting the CWU.

The last dispute which resulted in the 'four pillars' national agreement, was resolved following a massive yes vote, without any industrial action. But the signs are it won't be the same this time around.

Rico Back has come into the role of CEO with a golden hello of £6 million and a package of around £2.7 million a year. His role is clear, to break the strength of the CWU. This is a result of the sell off of Royal Mail and the push towards maximum profit and the rundown of the service.

The issues over the four pillars agreement are only the tip of the iceberg. Royal Mail has announced a five-year plan to remove all parcels above shoe box size from most delivery offices and bypass mail centres. In a stroke this will cost 20,000 jobs. What's more, it clearly states that Royal Mail will no longer be a letters company.

Also Rico has refused to support the CWU in maintaining the 'universal service obligation' which ensures every household in the UK gets a six-days-a-week service. If this was to go, that would mean another 20,000 jobs lost. So in total, a third of the entire workforce. This is clearly to maximise profit in a privatised company to keep the hedge funds happy.

We have already seen a huge amount of unofficial action, unit by unit, mainly over the bullying culture within Royal Mail, and an increase in disciplinary action against CWU reps and officials.

After the ballot result is announced we must plan for the fight of our lives. This clearly won't be resolved by short-term action. But it is very likely to be a bitter dispute, where we will need the support of the whole trade union movement. Support groups should be set up around the whole country in preparation for this battle ahead.