It's OK to talk. But what if the service I need to talk to has been cut?

The concept of 'it's OK to talk' and such ideas are important. They open up the possibility of being open about mental health and I applaud and encourage them.

That being said, talking to your mate often isn't enough. The disgraceful state of professional mental health services in Britain is a scandal that needs shouting about on Mental Health Day and every day.

I've seen friends, family and loved ones ignored, discharged and put on waiting lists due to a crisis in resources.

I've sat with someone who's openly admitted they're close to killing themselves, tried to find a safe place for someone admitting to me they've been self-harming and had to wait hours for the professional help these people needed.

That's just me, I'm sure everyone has a personal story about the mental health crisis. It's a national scandal.

I could go on about the general impact of austerity - its impact of low wages, poverty and service cuts on mental health - but that's a separate point. I'll stick to mental health services.

The NHS, and in particular mental health, is at breaking point. We need proper full funding for all our health needs.

And we need to oppose a capitalist system that profits off the woes of the masses and fight for a socialist society that can deal with the root causes of mental health problems. 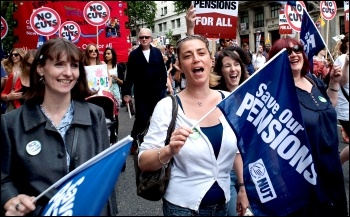 The High Court decision - that the government's handling of the rise in the state pension age for women was not unfair - is yet another perfect example of how workers cannot trust the legal system to defend their interests!

The High Court is made out to be an impartial and fair system, above politics to defend people. After the recent ruling that Boris Johnson acted unlawfully in the suspension of parliament, some trade union leaders and left activists praised the court as a 'defender of the people'.

This is not true, and dangerous for left figures to declare! Most laws are created by the capitalist establishment to defend their power, positions and interests.

When workers have been able to win changes in the law, it's only been through collective struggle, like the mass mobilisation of workers in trade union movements.

If the current legal system was truly on the side of justice - it would be for workers' justice!

The government raised women's state pension age from 60 to 65 to make it 'equal' with men - now both sexes suffer the same 'equal' exploitation and have to work longer!

If there was actually any justice, the pension age for men would have been reduced to 60 so all workers have more time to enjoy their lives.

If it were up to the capitalists, they would have us work until we die and the idea of retirement becomes a fairy tale. However, if history teaches us anything, it's that workers have fought to better their living standards, so I'm sure the story will not end here.

Dave Nellist's article was most welcome. (See '40 years on: Mandatory reselection more vital for Labour than ever')

Dave states: "The conference decisions (agreeing to mandatory reselection) became a key trigger for the formation of the Social Democratic Party (SDP) in March 1981 and split the Labour vote in the 1983 election, allowing the Tories to be re-elected."

This may have impacted on the scale and implementation of mandatory reselection because those local parties that embarked upon replacing MPs like Reg Prentice were subject to enormous media pressure.

"Mandatory reselection lasted only a decade." And so did the SDP who merged with the Liberals to form the Liberal Democrats in 1988.

The 'Gang of Four', who set up the SDP, claimed their objective was to "break the mould" of British politics. In that they failed.

But their real objective was to prevent a left-wing Labour government, led by Michael Foot, being elected in 1983. In that regard it was 'job done', even though it paved the way for a decade of Thatcherism!

This year we had a repeat. Blairite MPs, led by Chuka Umunna and Luciana Berger, split off with disenchanted Tory MPs to form Change UK. According to the Times newspaper, "Change UK was born at the Labour Party conference of 2018" where the reform of the trigger ballot system made it slightly easier to get rid of MPs.

The SDP took seven years to merge with the Liberals. These Blairite MPs took less than seven months to join the Lib Dems.

How ironic that the Lib Dems, who in coalition with the Tories implemented their programme of austerity, have now become a refuge for 'homeless' MPs.

Dave rightly says: "The election of Jeremy Corbyn as Labour leader in September 2015 fundamentally altered politics in the party." But four years on, the struggle for control and leadership of the party continues.

If Jeremy Corbyn leads the party to victory in the next general election that will be an important battle won, but the undeclared war against capitalism inside and outside the party will have only just begun.

I thought it was a really good article by Ben Robinson in the Socialist, (see 'Climate change: what's socialism got to do with it?'). But unfortunately one paragraph let it down!

He talks about the profit motive and says: "The results of our work are transformed by employers into capital, of which we receive a fraction as wages. The bulk is claimed by businesses as profit".

I'm not sure this is correct in that it is surplus value that is created, out of which a profit is made but certainly not the amount that the article puts forward. Could an explanation be provided on this so that readers don't get confused?

Above the Daily Mirror NHS poll is a list of 70 Tories and Liberals who have been, or are currently, connected financially to private health companies. The list of shame would make for a good poster.