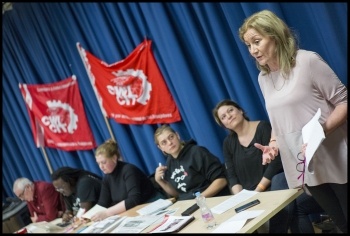 The packed international rally at Socialism 2019 was a display of the strength and determination to build the Committee for a Workers' International (CWI).

In a time of intense capitalist crisis, this is dependent on the strength of our ideas and uniting the working class and young people in struggle for socialism.

Comrades from sections across the CWI spoke passionately and determinedly about what needs to be done.

With revolutionary waves in Ecuador, Lebanon, Chile, Haiti, Hong Kong and elsewhere, it is of crucial importance to be armed with the correct ideas and programme.

Laura Rafetseder (CWI Austria) spoke of the upsurge in collective bargaining agreements from retail, metal and brewery workers, in a country previously seen as a "traditional safe haven for the capitalist class", where time lost to strike action had previously been measured in seconds!

She spoke of the collapse of support for right populists after they had exposed their true nature through enabling austerity and implementing cuts.

Fiona O'Loughlin's (CWI Ireland) powerful and emotive contribution spoke of how capitalism cannot even guarantee the basics of survival.

Brexit fog is also prevalent in Ireland and used as an excuse by the Irish establishment to push through incredible amounts of damage to working-class people.

This is demonstrated by a severe housing crisis in Dublin. She spoke about a homeless man, living in a tunnel, being eaten by rats, such is the degradation that the working class is suffering.

Fiona demonstrated the determination of the CWI in Ireland to build a genuinely revolutionary party based on the working class to fight back and end all oppression.

Peluola Adewale (CWI Nigeria) talked about the collusion between state forces and Sumal foods to persecute Abbey Trotsky with multiple arrests, trumped up charges, and intimidation. 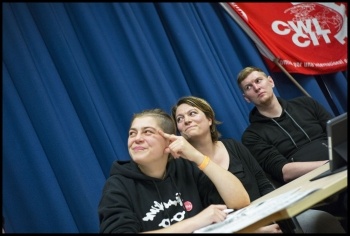 Armed with Trotskyist ideas the CWI's high profile in the country is based on having correct Marxist methods and a clear orientation to the working class.

Michael Koschitzki (CWI Germany) opened with details of an attempted massacre at a synagogue in Germany and the vacuum that is created when left organisations do not use a class programme to cut across the far-right, especially with the AfD being seen as a 'voice to air economic issues'.

US Trotskyist Jai spoke in depth of the failures of the US school system, with large class sizes and a severe lack of resources leading to wildcat strikes by teachers.

He spoke of the US working class being the "sleeping giant which needs to wake from decades of slumber" and is beginning to stir.

The energetic and determined rally ended with a closing speech by Tony Saunois (CWI Secretary). He summed up the situation internationally of capitalist crisis and the "vast accumulation of grotesque inequalities embodied in neoliberalism". 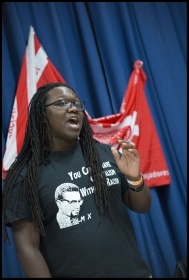 Tony spoke of the potential recession looming and the surges forward in consciousness of the working class in the recent period; the the use of identity politics in the US to divide the class and the upsurge in revolutionary actions in Chile. After 30 years of neoliberalism, Tony said, it is in the birthplace of neoliberalism (Chile) that it could also be buried.

The failures of the new left after the 2008 crash resulted in the coming to power of a series of right populist. With a new recession looming, the potential economic impact of Brexit, the failures of social democrats, the period offers renewed opportunities for our revolutionary party.

Small forces intervening correctly can shape events. With our determination, programme and ideas, we are excellently placed to be a factor in future upheavals.

We have never been more confident in the CWI.