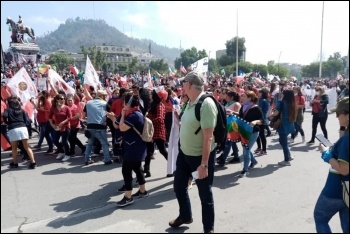 Marching against the government in Chile, November 2019, photo by Socialismo Revolucionario (CWI Chile)   (Click to enlarge)

Mass social protests against inequality, injustice and state repression, continue to erupt in Chile weeks after an uprising was sparked by a hike in Metro fares in Santiago.

The rotten right-wing regime of president Piñera initially deployed armed police and the army under a state of emergency - redolent of the dark days of the Pinochet dictatorship - but with little effect, and massive protests are continuing.