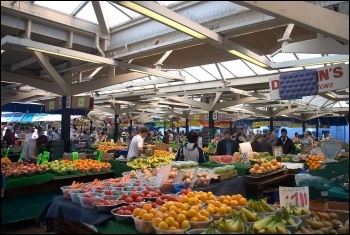 Over 100 Newham, east London residents and market traders crowded into a church hall on Green Street to hear Labour Mayor Rokhsana Fiaz explain plans to 'regenerate' Queen's Market. The fear though, of all at the meeting, was that what we will actually get is gentrification.

The market is a stone's throw from the new development of expensive flats built on West Ham's old Boleyn football ground. We don't want another Rathbone street market, nearby in Canning Town, where the market is reduced to a handful of stalls surrounded by flats and restaurants locals can't afford.

Newham is already victim to the big business land grab happening all over London. The traders, their stalls and the vital service of providing decent cheap food must stay.

The mayor let slip that there will be £45.3 million cuts in the borough, and that the future of the elderly sheltered accommodation, Hamara Ghar, opposite the market, is up for 'consultation'. Some of the residents were in the room. They said: 'we are here, you have consulted us and we are telling you we don't want to go anywhere!'

Socialist Party members responded to all this by saying, Newham is already on its knees. There are people sleeping in the parks and children living in basements and garages. Where will your axe fall, because this borough cannot take another blow?

The mayor - elected 20 months ago on a ticket of standing up for Newham and being different from her arch-Blairite predecessor Robin Wales - said: 'Newham council will not break the law; we have to set a legal budget.'

She blamed the old administration for failing to put up council tax, and made it clear she will. The audience responded by saying we don't want that either.

The current tranche of Labour councillors have been in power for 20 months. They have done a few good things, like employ 43 youth workers more than any other borough.

But there is no big visible improvement in living conditions. In fact things have got worse.

The mayor and council were given no grace by locals at the meeting. Gentrification of Queen's Market and closure of Hamara Ghar will be fought if they attempt it.

We warned the mayor that we will be protesting against her just like we did with Robin Wales. The mayor told us she was different from the old administration, she said she was a fighter.

If that is the case, then set a no-cuts budget. Socialist Party members will fight for that.