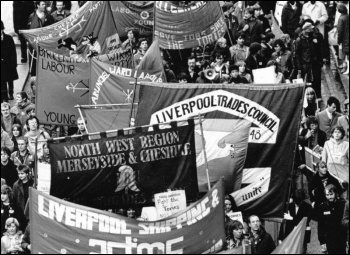 Liverpool city council's struggle in 1983-87 for more funding from the Thatcher government was an inspriation to workers, photo Dave Sinclair   (Click to enlarge)

The five Labour leadership candidates at the first regional hustings pursued a common theme - how can Labour win the trust of the working class.

Rebecca Long-Bailey said she was kept awake at night worrying about this, and how Labour could become "salespeople for socialism".

It's fitting that this search for a road to the working class took place in Liverpool, with its militant tradition. But it's a tragedy that no mention of the city's vital socialist lessons was made by the candidates.

Why? Since 2010 almost 800 libraries have been closed; there's been a 73% cut in spending on youth services; social care is a social crisis; councils have cut over 800,000 jobs in that period; almost 200,000 council homes have been lost. The most savage cuts have been in Labour-held areas.

In 2010 the Con-Dem Chancellor George Osborne demanded that Labour councils do the Tories' dirty work and make the cuts at local level. In this way they would be complicit in ensuring that it was working-class people who should pay the price for the economic crisis caused by the bosses and billionaires - accepting the logic of capitalism. And they did. That is a major factor as to why Labour has lost the confidence of working-class people.

In the general election, Liverpool elected Labour MPs - most of whom are in the socialist campaign group. But it's not the case that Liverpool was always a Labour city - it was won. Despite a history of working-class struggle, from 1979-83 various coalitions of Tories and Liberals held power in the city.

But a socialist programme for working class struggle against the Tories turned that around. Under the leadership of the '47' socialist councillors, with the Socialist Party's predecessor Militant playing a key role, fighting to get back what Thatcher had stolen from the city defeated the Tories.

A conscious membership of a mass Labour Party was built through campaigns in the factories, workplaces and on the doorsteps - with general strikes, mass meetings and the confidence in a socialist alternative. The fact that all decisions of the council were made democratically, with those in opposition allowed to put their point of view, was an important factor. But so too were the material gains of the working class from those socialist-led struggles.

An important step to winning back trust would be for Labour to take the Liverpool road. That requires fighting for what the Tories have stolen from the working class. Long-Bailey has written that "we can take charge and build a very different future for ourselves, but only if we grasp our most powerful collective weapon: a government for and by the people."

Even before the next general election local government offers Labour a chance to do this. Liverpool's socialist history shows how.

No-cuts council budgets and the building of mass united struggle for the money stolen from the working class are central to whether Labour can become a party of the working class and relevant to the fight against Johnson's attacks.