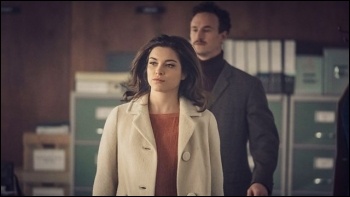 Benjamin Disraeli, two-time Tory prime minister in the nineteenth century, once said: “A Conservative government is an organised hypocrisy”. The Christine Keeler story on BBC1 would seem to bear out that analysis.

Yet the series suggests that the police pressured both of them to give fake evidence against Stephen Ward, the society surgeon who introduced Keeler to Profumo. If that isn’t perjury, what is?

The press routinely referred to them (without evidence) as “prostitutes”. Prostitution was not a criminal offence. They were vilified in the media and the Conservative Party has never forgiven them. The scandal contributed to the Tories losing the 1964 election to Harold Wilson’s Labour Party.

Stephen Ward (played by James Norton) found the ruling class closing ranks against him. The extraordinary waste of police manpower in ‘gathering (very little) evidence’ against him caused his patients to go elsewhere. He was driven to suicide and, for many people, his blood is on Conservative Party hands.