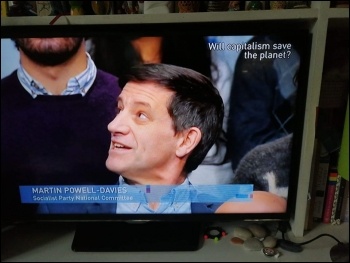 Will capitalism save the planet? "The reality is that the big companies rule the roost, and they're only interested in short-term profit," replied the Socialist Party's Martin Powell-Davies on BBC1's 'The Big Questions' on 9 February.

Martin went on: "Look at what Boris Johnson's just done with a failing company. He's nationalised it. All of these companies are failing the planet. We should nationalise them all.

"Have a plan, where the world can actually plan what is needed, instead of looking at short-term profit. It's the only way to rescue the planet." Martin drove the key issue home in the mere couple of minutes he had to actually critique the system in question, despite constant irrelevant deflections from host Nicky Campbell.

Meanwhile, the Extinction Rebellion representative on the main platform praised the capitalist policies of Margaret Thatcher and Milton Friedman. These have failed to solve the problem for decades - in fact making it worse.

The Socialist Party's latest appearances on London talk radio station LBC have included responding to Labour leadership candidate Rebecca Long-Bailey's statement supporting strikes. Dave Nellist welcomed this and said all Labour politicians should back trade union action - but under neoliberal Blair the party did not. Rob Williams said Brexit wasn't the only issue in December's election - Labour leaders must instruct councils to stop passing cuts budgets and fight to win the funds back.