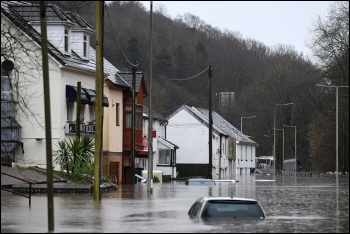 Two storms in a week brought some of the worst floods in living memory to Wales and parts of England and Scotland, killing at least five people and damaging thousands of homes.

Big business didn't send the rain. But the distorted priorities of the profit-obsessed capitalist system are to blame for the misery that ordinary people must endure because of it.

It is also inaccurate to describe Storm Ciara and Storm Dennis simply as natural disasters. The increased frequency of extreme weather phenomena is the result of climate change, driven by a system that sacrifices everything for profit.

No bill should be laid at the door of the residents of houses that have been damaged. If private insurance companies try to wriggle out of paying again, the government should step in. They must not be allowed to pass on the costs with higher premiums either. Similarly, workers whose workplaces were flooded out must have their wages guaranteed. 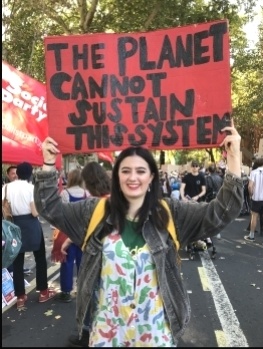 The Fire Brigades Union reports that its members have had to suffer funding cuts totalling £140 million in England alone, with equivalent sums cut in other parts of Britain.

Workers in the emergency services are stretched past their limit. The efforts they and community members have made to help those hit by the floods have disgraced Boris Johnson. By contrast, Johnson has refused even to visit areas hit by the storms after being heckled last year.

Infrastructure weakened by years of under-investment has been literally swept away. Rail beds in the South Wales valleys have been washed into rivers, leaving rails suspended in mid-air. Defences erected hastily after the last floods have proved too little, too late.

But it's not that the resources don't exist in society: it's that they're monopolised by a tiny handful. Bosses at the Environment Agency, which is responsible for flood defences, have pocketed £1.5 million in bonuses over the last five years - while only paying many workers just over the minimum wage. The private companies which own the water industry act in similar fashion.

Working-class communities will never receive full protection until austerity is reversed and the water sector is nationalised, and run under democratic workers' control and management.

Energy and transport too, to ensure meaningful action on climate change, along with the banks and big firms responsible for impoverishing workers and public services. Then a democratic, socialist plan for homes, jobs and the environment could be drawn up democratically by working-class people as a whole.