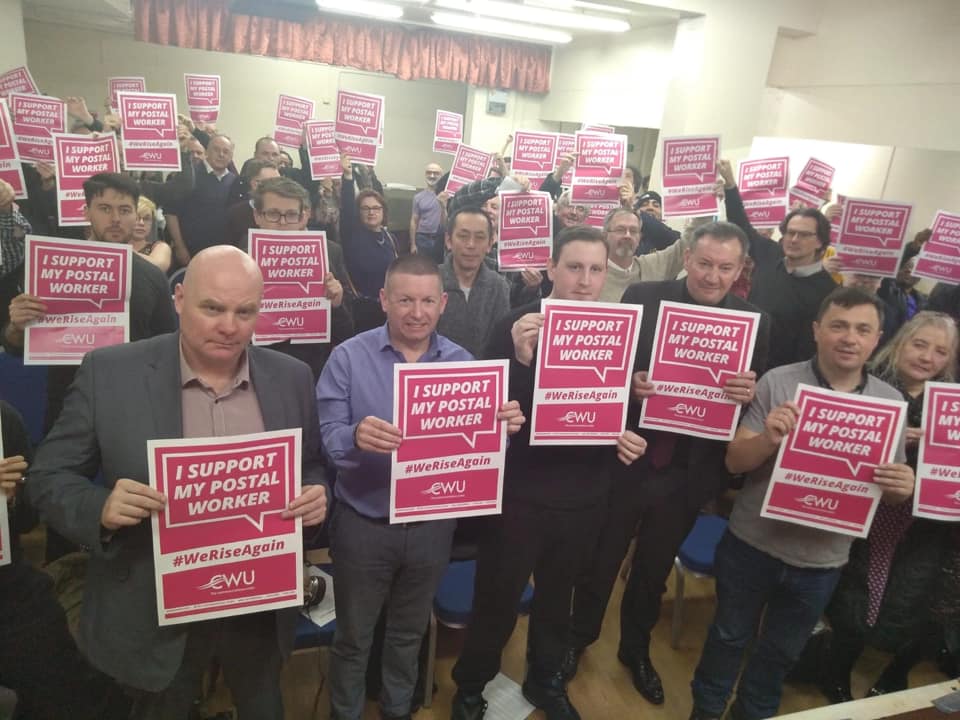 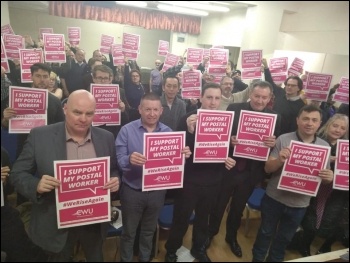 A packed London meeting of the National Shop Stewards Network (NSSN) on 18 February brought together 80 workplace militants, strikers, socialists and leading left-wing trade unionists to discuss some of the most pressing questions facing the working class since Boris Johnson’s victory.

The meeting pledged solidarity with the postal workers embarking on a reballot.

The meeting brought these speakers together with some of the key battles taking place in London at the current time. Kathy Smith, Unite branch secretary, fresh from the victory at Bromley libraries was joined by Unite regional official Onay Kasab reporting on the battle of parking wardens in Hackney, a victory on Woolwich ferries and the fight against outsourcing.

PCS union member Lydia Ndoinjeh spoke about the battle to save Ealing tax office, while PCS official Helen Flannagan spoke on behalf of the bold cleaners, security and maintenance workers at the Foreign and Commonwealth Office, fighting for union recognition from private employer Interserve.

Fiona Taylor, University and College Union (UCU) member at Goldsmiths University, reported on the national strike action UCU members were about to embark on again, while Lewis Baker reported on the fight for £15 an hour by McDonald’s workers, members of the bakers’ union BFAWU.

Reminding the meeting that the RMT formed the NSSN, Steve Hedley called for “maximum unity among rail unions”, and said the fight would require “reaching out to groups like this, and other trade unions, and the whole trade union movement”. He pointed to the possibility of unofficial action.

Terry Pullinger explained “we need to inspire a new generation of trade unionists and we’ll only do that if they see trade unions taking action. Being prepared to get into the workplace and organise.”

Declaring that anti-trade union laws are “in danger of wiping out the trade union movement and neutralising us to staff associations” he referred to the outrageous court action against the CWU and said “if that ain’t enough for the TUC to get up off its knees, I don’t know what is.” 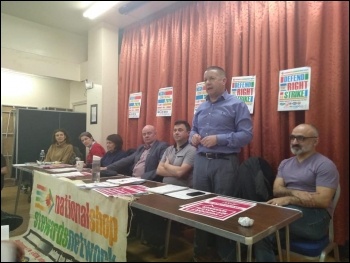 Onay Kasab said that the test in the Labour leadership election is where do you stand on council cuts – do you agree with the ‘dented shield’ idea that it’s better for cuts to be made by a Labour council than the Tories, or do you call for needs-based, legal, balanced, no-cuts budgets.

From the floor, Socialist Party member Nancy Taaffe stressed the importance of the political fight, and raised the need for socialists in London’s City Hall. Who will fight for socialist policies in London, if Sadiq Khan is left unchallenged by socialists and trade unionists?

Chairing the meeting, Socialist Party member and NSSN national chair Rob Williams declared that this is “not a strong Tory government, it is far from certain that it will last five years, but that’s conditional on this trade union movement fighting.”

He said: “The worst thing we can do is play the waiting game and hope that Boris Johnson forgets he talked about anti-union legislation” He called on the Trade Union Congress – and if not them, the unions that are willing – to use their authority to organise a national tour of rallies in every town and city, to prepare the ground for a national Saturday demonstration.

And “link the strikes, to win those disputes and to build the fight necessary to defeat the Tories and defend the right to strike.”

The issues raised above are among the many reasons why it is important to fight for socialists to be in London’s City Hall. See a socialist manifesto for London and donate to the campaign for socialist policies in London’s May elections, at: www.londonsocialistparty.org.uk