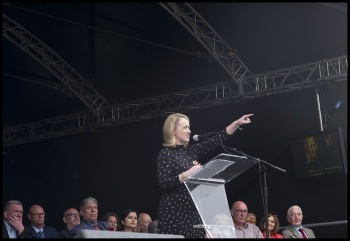 Rebecca Long-Bailey - would you stand firm against the capitalist class? photo Paul Mattsson   (Click to enlarge)

150 people tuned out in Birmingham to hear Rebecca Long-Bailey's pitch for the Labour leadership. The decline in Momentum's influence and the partial demobilisation of Labour members is reflected in the fact that Jeremy Corbyn spoke to an audience of 800 in the same venue in 2015.

A Birmingham Labour councillor, reflecting public despair at the relentless cuts in council budgets, asked what she would do to help Labour councillors who didn't want to vote for cuts. All she said was that she would enable councillors to show people how good things could be under a Labour government, while they are cutting services beyond the bone!

There was no mention of no-cuts budgets or using borrowing powers and reserves to protect services. She was also taken to task by a Labour member for signing up to the International Holocaust Remembrance Association's definition of antisemitism.

Rebecca made many good points that Socialist Party members would agree with. Building 100,000 council houses a year, providing secure, well-paid employment, ending the race to the bottom and blaming the near collapse of public services on underfunding not immigration.

She talked about aspirations for improved conditions of life, but this wasn't linked to the need for socialist policies or the need to change society. The word 'socialist' was only mentioned once.

Rebecca Long-Bailey is a long way from the socialist leader that workers need. The battle for a worker's party needs to continue.