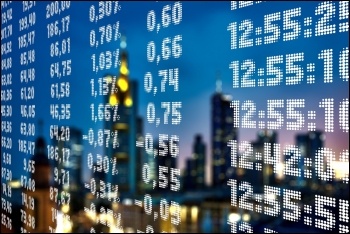 The biggest one-day fall in stock markets since the financial crisis; an oil price war between Saudi Arabia and Russia, and the fastest drop in the cost of oil for 30 years. The impact of coronavirus on an already fragile world economy is creating enormous volatility, aggravating a slowdown and risks plunging the world into a recession that could even be as deep as 2008-09.

Supply chains have been hit, initially as a result of temporary factory closures in China. That in turn has reduced world trade, with sea freight sinking to its lowest level since 2008. This is combined with a fall in demand for air travel, hotels, conferences and outside entertainment. So tourism is affected, one of the main industries in Italy, a country badly hit by the Covid-19 virus.

The economic impact is a scissors effect from two directions: 'supply shock' of disruption to goods and 'demand shock' of people staying at home more, so spending less money than usual. More and more people have been advised to self-isolate or just don't want to risk going out much. Some companies have told staff to work from home, including a number of major tech companies in the US.

All this has led to stock market volatility, including at one point the largest one-day fall on the US stock markets for over ten years. The stock markets don't reflect the real value of company assets, nonetheless a real reduction in global economic growth is taking place.

It is not yet known how widely the virus will spread and the timescale. But since its onset, the OECD has written that global growth might even shrink in the first quarter of 2020. It has forecast a minimum fall in GDP growth of 0.5% this year, or 1.5% if there is a severe pandemic. Others have suggested there could be a much worse potential fall - nearer 5%.

Whatever the eventual economic impact, it won't be solely due to Covid-19, as the world economy was already very vulnerable to shocks. In the decade since the 2007-08 financial crisis, governments worldwide have been struggling to improve weak economic growth. Stimulus measures were never entirely stopped, including interest rates being held at historically low levels - presently negative in Japan and the Eurozone. Then, more recently, came signs of a new recession on the horizon.

Debt levels have never been higher. Total debt - governmental, companies and households - is now over three times the size of the global economy. The virus could quickly become a factor tipping some of these debts into unsustainability.

Investment and, in some countries, productivity levels remain low. Given how fragile the world economy is and its present stage in the boom-slump cycle, the virus outbreak could potentially trigger a rapid descent into recession worldwide.

Governments and central banks are desperately trying to prevent this by injecting more stimulus measures. The US Fed made a 0.5% emergency interest rate cut, the biggest since 2008, and a number of other central banks cut rates too. The IMF, World Bank and US Congress issued emergency funding packages, together totalling over $70 billion.

China and Japan are also among the major economies which have ploughed additional money into finance institutions.

However, the financial tools they can all use were partly used up during and after the 2007-08 crisis, especially the ability to lower interest rates. And as the Economist pointed out: "No amount of cheap credit can stop people falling ill". So governments and banks are flailing around without any sure way of achieving a safe landing.

Another factor limiting their response is the increased tensions between the global powers compared to a decade ago, which cut across cooperation in fighting the virus and its knock-on effects.

Alarm is coming from capitalist classes about how weak public health services generally are, now that whole economies face consequences that could directly hit their interests. In the US, a quarter of workers have no paid sick leave and 28 million have no health insurance.

The right-wing Economist admitted that more entitlement to sick pay would cut the spread of the virus and help "soften the blow to demand which, along with a supply shock and a general panic, is hitting economies".

The OECD too, wrote: "This episode of weak growth reinforces the need for stronger public investment in many countries, broadly defined to include education and health care spending, to support demand and boost medium-term living standards".

There's also realisation that the huge stimulus injections can just end up in the pockets of the rich, as has mainly happened since the last crisis. So the Economist argues: "Better to support the economy directly, by helping people and firms pay bills and borrow money if they need it".

The alarm is high enough that some such limited measures are being announced across the world, but we demand that they go much further to prevent working-class and middle-class people from bearing the cost of the coronavirus crisis.No jobs or wages should be lost and everyone should have access to the best possible health care.

Where necessary, to maintain jobs and pay, large companies should be nationalised, with compensation paid only on the basis of proven need. Trade unions must demand that company books be opened to inspection, and government assistance be given to small businesses that genuinely need it.

These demands and more should also apply when, once again, workers are faced with paying the price of the coming downturn.

There will understandably be anger towards governments over inept responses to the spread of Covid-19 and lack of transparency. This is already the case in China, but also in western countries, including the US, where Trump has been dangerously dismissive and shown lack of preparation.

As capitalism is a system based on profit and not human wellbeing, and is now in long-term economic decline, it will resist giving sufficient basic protection and aid to the majority in society when disasters hit - whether weather-related, diseases, or geological events.

Only through socialist planning in every country, coordinated on a global scale and utilising the immense resources that would become available from publicly owning the main industries, will this be possible.

None of the modest measures expected in this week's UK budget to counter Covid-19 will fundamentally change the fact that the NHS can't cope with a major epidemic.

Inadequate funding over many years has meant devastating staff shortages and lack of beds and equipment. The severe cuts in funding to local authorities will also become even more clearly exposed, as councils are meant to be able to play a key role in responding to public health emergencies.

Neither will any attempted 'feel-good' measures in the budget - designed to reward voters for returning Johnson's government to power with a majority - make up for long-stagnant wages and the fact that in recent years the poorest families have become poorer.

With the economy barely growing, new chancellor Rishi Sunak will not be able to get anywhere near to solving the multiple crises in health, social care, and living standards generally, within the constraints that his party and the financial institutions try to impose.

Then there is the Tory government's acute problems regarding Brexit, with the first round of trade talks with the EU ending with EU chief negotiator Michel Barnier stressing "very grave and serious" disagreements in the way of a deal.

Advice to Boris Johnson on that issue has come from Simon Nixon, a lead writer in the Times, who wrote that the government could use the coronavirus crisis as an opportunity to extend the transition period, soften some of its red lines or, among other suggestions, "provide cover for exiting the transition period at the end of the year with no trade deal. After all, in the midst of a crisis it will be easier to blame the economic consequences of Brexit on the virus".

This gives a glimpse of discussions within the capitalist establishment which are normally hidden from public view. The Socialist Party will continue to expose their anti-working class deliberations and to help the workers' movement build a force that can defend living standards and remove the Tories from power as soon as possible, while also building support for socialist ideas.