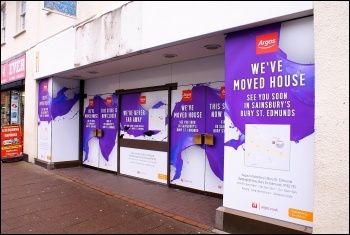 Argos has announced the transfer of its staff working in Sainsbury's shops to Sainsbury's itself.

Since purchasing Argos for £1.4 billion in 2017, Sainsbury's has now opened several hundred Argos shops within its stores. As this expansion has continued, many of these have replaced pre-existing Argos stores.

It is clear that management are conducting a policy of levelling down terms and conditions. Last year Argos staff bonuses halved in value from £10 to £5, the same amount currently received by Sainsbury's workers.

The transfer would mean protection for a year. But then, while workers would get a pay increase to £9.20, they would lose paid breaks, premium payments and the right to take bank holidays off.

As we pointed out in relation to the Asda-Sainsbury's potential merger, there is a need for trade unionists on both sides of any merger to come together to plan a campaign to level up terms and conditions to the best level in either company - or better! Failing to do so leaves the door open for the company to 'divide and rule' and level them down.

Unfortunately, this has been the case in Sainsbury's where Usdaw and Unite meet separately with the company, one after the other. Reps across the two unions urgently need to come together and plan a campaign to win a joint collective bargaining agreement with the company.

At the same time, negotiations on the Argos pay award for this year have been taking place. It is just above the Tory 'living wage' at £8.50 for over 25s. Not only is this less than that of Sainsbury's, but it falls short of Usdaw's four-year-old demand for a £10 an hour minimum wage.

Like in Morrison's last year, workers in Argos are frustrated by low pay and may well vote down the pay offer. In which case, Usdaw's response cannot be to again refuse to mobilise the membership to fight for more.

Members meetings should be organised to discuss with the national negotiating team to put in a counter-offer, with serious discussions about what campaigning, coordinated between Usdaw and Unite, can be done to back this up, up to and including industrial action.