Wolves - Read the paper the bosses don't want you to

Selling the Socialist outside a DWP office, management send out a security guard to get rid of us. But just at that moment, one of the union reps walking past recognises us from coming down to support previous strikes.

The union rep tells the security guard to leave off and that the 'gaffers' can talk to him if there's a problem. Subscribe to read the paper that the bosses don't want you to read.

Swansea - the stalemate is breaking

The Socialist Party campaign stall was the most successful this year. The Young Socialists stall built for the climate strike.

Our regular Socialist Party stall featured petitions and posters around the socialist response to coronavirus and the need to defend the NHS.

Both had a steady stream of locals wanting to talk to us about our ideas, response and plans to tackle these crises. We sold over 20 copies of the Socialist and raised £20 fighting fund.

One young mum donated £5. She bought copies of the Socialist for her and her 12-year-old daughter. She commented that it was great to see young people making a stand.

An older man, a lifelong Labour voter, stopped to ask our young members what our views are on the future of the Labour Party. A woman bought a copy of the Socialist after asking if we'd made good on challenging the local council's latest cuts budget. She was proud to see people taking them on.

Hopefully, this week's surge in interest is an indication of a shift in the consciousness of the working class in our city, who seem to have been in a state of frustration since the election in December.

As we were setting up a couple approached asking if they could sign the petitions. He bought a copy of the Socialist, while she signed all four of our petitions - on NHS, young workers, council cuts and coronavirus.

She said the Government must start prioritising the NHS and protecting young workers. For the first time, she had voted for the Tories because of Labour politicians regarding Brexit.

She was worried her age and health conditions made her vulnerable to coronavirus and it was impossible to keep safe after years of austerity forcing down their standard of living.

She was angry with Stoke Council for cutting services. She thanked us for standing up against injustice and gave us a £2 donation to the fighting fund.

Young people in North Devon are looking for socialist answers to the problems of education, housing, jobs and pay. The Socialist Party held a campaign stall and raised our programme at a climate forum on 7 March in Barnstaple.

We have two new young Socialist Party members in Barnstaple. And we met more young people interested in joining on the day.

On the stall we called for a workers' charter to tackle the coronavirus crisis - an immediate provision of more hospital beds, protection for health staff, and full pay for all workers, including those in precarious zero-hour jobs and the self-employed.

At the climate forum I quoted Greta Thunberg: "nothing is being done to halt the climate crisis, despite the beautiful words and promises from our elected officials", demonstrated by Devon councillors cutting buses.

Newcastle - Do we need a fightback? Yes! 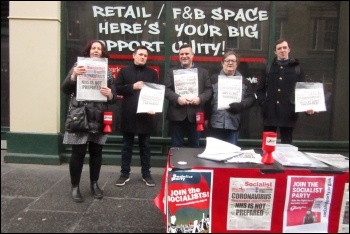 One young fella told us that all his family were fed up with the Tories and angry about attacks on the NHS. But there was a feeling there's nothing they can do.

We in the Socialist Party think there can, and must be, a fightback. The people we spoke to liked our workers' charter to tackle coronavirus, and that we were defending the NHS

Hopefully coronavirus won't become a full-blown epidemic, because if it does it'll be the poorest that are hardest hit.

We demand that workers on zero-hour contracts - many of whom work in the food industry and are saying they won't be able to afford to stay off work and self-isolate - receive sick pay. Failure to do this could endanger many more.

Anyone on benefits who is unable to sign on must not be sanctioned. Self-employed workers should also receive sickness benefit.

On our campaign stall, we met someone who was looking to join a political party, but just didn't know how. After a discussion about low pay and the NHS, I explained how she could join one - ours of course! She gave us her contact details and she's coming to our next meeting.