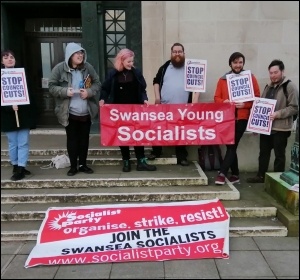 Ask any Swansea resident about the state of social care, education and refuse collection and they will tell you the real story. A decade of Tory cuts, passed on by a Labour council, has decimated services. In the last three years, another £70 million cut.

There is a massive democratic deficit in the council's decision-making process. At the budget meeting, a short ten-minute window was given over for public questioning, taken up by a series of pre-written questions, although three Socialist Party members were able to put the council and its leader on the spot.

Swansea Trade Union Council organised a lobby outside. Because of a one-off election-year pay-out, the council tried to claim that they were investing rather than cutting, despite a further £10 million in cuts contained in the budget. After almost a decade of austerity, the council says services are now better run, as they are doing "more with less".

The Trade Union Council and the Socialist Party are the only forces in the city that have consistently and diligently campaigned against the cuts in Swansea. We have long advocated a legal no-cuts budget and a campaign with other councils doing likewise to demand the money from central movement needed to run our vital services.