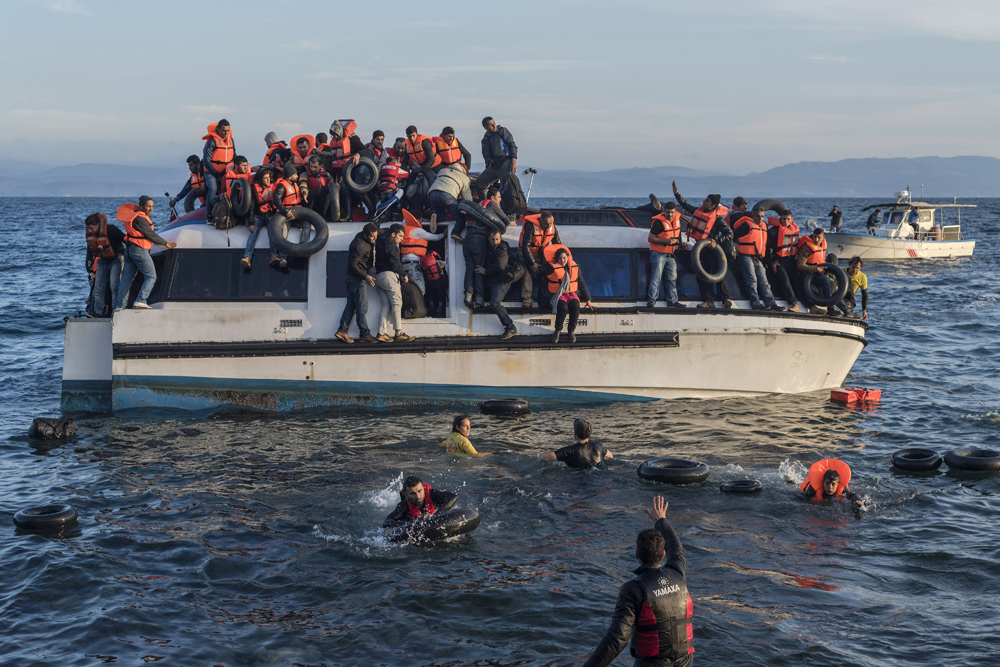 A new refugee crisis has erupted on the Greek-Turkish border. The trigger for this has been the conflict between the regimes of Turkey and Syria, backed by Russia, in the disputed Idlib region of Syria.

There, the deaths of 34 Turkish troops, reportedly from a Russian airstrike, saw Turkey’s president Erdogan respond by ramping-up the country’s military intervention. At the same time he’s pressuring the EU states and Nato military alliance into supporting Turkey’s occupation by threatening to open its borders to allow an estimated four million refugees to cross into Europe.

A tentative ceasefire has now been agreed between Erdogan and Russian president Putin, but the ongoing Syrian conflict threatens to reignite at any time this regional military, political and humanitarian crisis.

In the following article, reproduced here from the CWI website, Alex Gounelas explains the refugee crisis as a failure of capitalism and advances a socialist programme for solving it.

Nowhere is the failure of the EU institutions to bring about genuine ‘unity’ of the continent, or the arguments of pro-EU politicians more exposed than in the current refugee and migrant crisis in Greece. Thousands of desperate people – many of whom have gone through five shades of hell to escape wars, oppression and desperate poverty, to reach foreign borders – are used as political pawns by Turkey, Greece, other European governments, populist politicians and nationalist and fascistic elements.

The real character of the EU was shown by the president of the European Commission, standing on the Greek-Turkish border and declaring that “Greece is Europe’s shield”, and then hypocritically saying she had “compassion” for those at the border.

The Greek government announced it will no longer process applications from migrants arriving on its shores. It intends to build a series of holding camps by the end of March, each to contain 20,000 migrants. Proposals for where these should be built includes uninhabited islands. Access to healthcare has been denied to the migrants and reliance is put on charities to provide basic help.

Heavy-handed tactics by Greek police have been exposed in the last few weeks, including boats of desperate people being shoved back to sea.

On the islands of Lesbos and Chios, police were filmed battering locals, smashing car windows and throwing teargas at houses. Video footage of a Greek man harassing a pregnant migrant woman is widely viewed on social media.

On 2 March, 1,000 mainly Afghan asylum seekers marched from Moria to Mytilini town, shouting “azanti” (freedom). There was also a demonstration of Greek locals, who clashed with the police.

The scale of the crisis has reached epic proportions. On 2 March, within a 12-hour time frame, 4,354 people tried to cross the Turkish border at Evros. From Saturday 29 February to Monday 2 March, over 24,000 attempted to cross the border. Around 183 people were arrested. Over 40,000 still await an answer on their asylum applications.

The islands have been descending into a form of occupied territory, where the police, in gang-like fashion, make up the rules as they go along.

The Turkish invasion into northern Syria, as well as the military actions of Russia and Syria, have led to the escalation of the crisis. Iraq, Afghanistan and Sudan, and other countries torn up by imperialist interventions and local despots, are creating millions of displaced people.

The US Trump administration effectively offered Erdogan a ‘green light’ both on the Kurdish question and now that of the Syrian border issue.

After receiving large subsidies totalling €6 billion from the EU, in order to accept and contain huge numbers of migrants and refugees, Turkish President Erdogan, is now backtracking. He is also cynically proposing the settlement of migrants into Kurdish areas in an attempt to change their ethnic composition.

The majority of the Greek capitalist press scrambles about trying to push the blame onto the governments of other countries, in a plea for them to do their ‘duty’ towards the EU establishment.

Meanwhile, most of the left in Greece seems to be sticking to a vague ‘open border’ policy, accusing anyone who does not agree with this position (which fails to take into account the concrete action needed to aid refugees and migrants, while allaying fears amongst Greek workers and the poor) of being ‘fascist’.

Neither of these perspectives has credibility among the majority of Greek people. This is especially the case for those living on the islands and border areas who have also seen their communities devastated by the vicious austerity hoisted upon them by both New Democracy and the supposedly ‘left’ Syriza government.

There are, of course, no easy solutions under capitalism, where war and economic crisis spiral indeterminably. What is needed urgently are immediate and clear demands from the left on what is to be done in the affected areas but also on a national level.

The international workers’ movement must clearly call for an end to attacks on refugees and immigrants by the Greek state and fascistic gangs.

The workers’ movement in Greece must organise democratically run defence committees, in local communities and workplaces, and protest against EU anti-refugee policies that can divide and weaken the working class.

The CWI calls for: