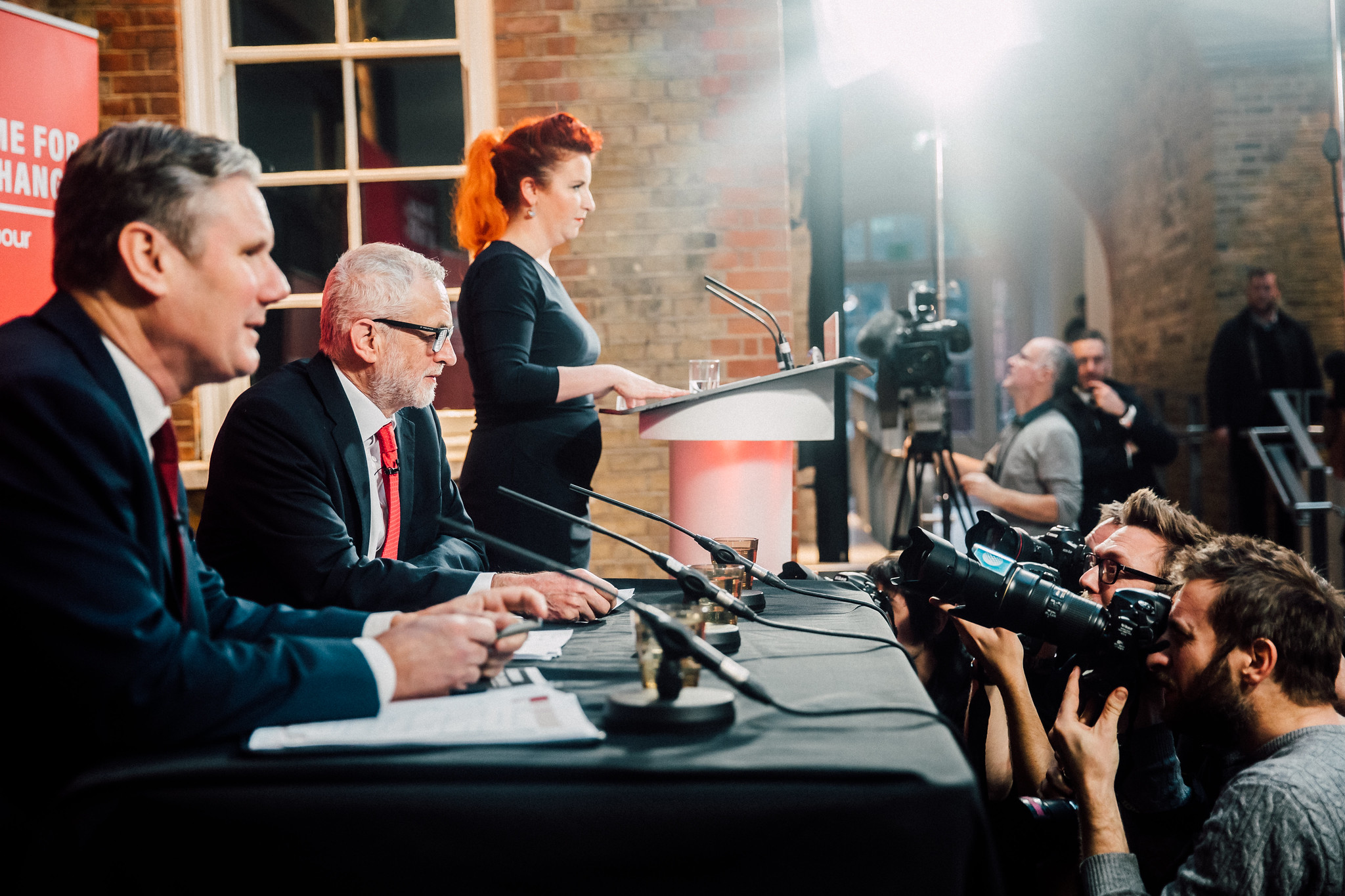 Editorial of the Socialist issue 1081

End of the Corbyn era – Organise to fight for socialist policies

Keir Starmer is seen as a safe pair of hands by the ruling class compared to ‘unreliable’ Corbyn photo Jeremy Corbyn photostream/CC   (Click to enlarge: opens in new window)

Keir Starmer, as was widely predicted, has been elected leader of the Labour Party. He won on the first round with 56.2% of the vote.

Almost half a million people voted in the election, and Starmer won a majority in all three categories: members, affiliated supporters (mostly members of affiliated trade unions), and registered supporters.

Starmer’s victory represents a qualitative step in the capitalist class’s campaign to make the Labour Party once again, as it was under Blair, a reliable vehicle for their interests. They were terrified by the 2017 election result, where Corbyn came close to being elected.

While Johnson now has a substantial parliamentary majority, the Tory Party remains a deeply divided party with a shallow social base which – faced with major events – could prove incapable of holding onto power. The coronavirus crisis, and the deep recession developing, could prove to be those major events. So ensuring Labour is a safe second team remains urgent for the capitalist class.

They have no prospect of political stability, however. On the contrary, in the face of the corona crisis they have had no choice but to support, in a desperate attempt to prop up their system, state intervention that – in some senses at least – goes further than Corbyn’s programme. This is one indication of the potential to win mass support for socialist ideas in the coming period.

Starmer did not openly campaign as a candidate of the pro-capitalist Blairite wing of the party, instead posing as a ‘unity’ candidate.

He also stood on a programme that included a number of demands from Corbyn’s 2019 manifesto, including supporting “common ownership of rail, mail, energy and water; end outsourcing in our NHS, local government and the justice system.” Had he not taken this approach he could not have won the election.

However, ‘by your friends shall you be known’, and his supporters revealed the reality. He was backed by Progress and Labour First, organisers of the pro-capitalist forces within the Labour Party. He also received widespread backing from the capitalist press, including from the editor of the Evening Standard, ex-Tory Chancellor George Osborne!

Given the scale of his victory, Starmer can now begin to reveal his real agenda more clearly. This is demonstrated in his shadow cabinet. Not only are Corbyn and McDonnell gone, so are their most consistent supporters – Ian Lavery, Barry Gardiner and Jon Trickett.

At the same time, the unabashed Blairite Rachel Reeves, who as shadow work and pensions minister promised to be ‘tougher’ on benefit claimants than the Tories, is back in the shadow cabinet, as is Lisa Nandy, the leadership candidate who was more openly right-wing than Starmer.

Starmer has refused to rule out joining a ‘Covid coalition’ government, a form of national government with the Tories. This is probably not posed immediately, but is nonetheless an indication of Starmer’s approach.

There is not one single ‘national’ interest but different class interests. The working class needs a party that will fight for its independent interests, not collude with the Tories in acting for the capitalist elite.

Starmer’s first post-victory article was written for the Murdoch-owned Sunday Times. In it he pointed to the need for the party to change in order to “become a credible government-in-waiting”. He added that “that starts by saying sorry to the Jewish community”.

Starmer’s piece was accompanied by an article by the Deputy Editor of the Sunday Times, Sarah Baxter, which called on him to “send packing the Marxists, the ultra-leftists and the anti-semites who flocked to Corbyn’s banner”.

This shows the strategy of the capitalist class, with Starmer as their representative, to use false allegations of anti-Semitism to drive the left out of any positions of influence they continue to hold in the party – and where possible out of the party itself.

Starmer’s victory was made possible because of the failure of Corbynism to transform Labour. The structures of the party remain largely the same as they were in the undemocratic Blairite years. The majority of the Parliamentary Labour Party and councillors are still on the right. Blair’s pro-capitalist version of ‘Clause IV’ remains.

The National Executive Committee (NEC) was one key party body which did, at least to some extent, shift left. But Starmer is also aided by the fact that all three NEC by-elections declared on the same day as his election were won by Progress/Labour First candidates, two of them replacing Corbynites.

Those who were enthused by Corbyn were never organised into a mass movement to transform the Labour Party into a mass party of the working class armed with socialist policies.

To have achieved this would have required a tenacious battle to take the party – at every level – out of the hands of the pro-capitalist wing. Instead, endless compromises were made with the right of the party in the name of unity.

They never achieved unity because the pro-capitalist wing would only have been satisfied with the annihilation of Corbynism, as they will now prove.

They did, however, succeed in muddying Corbyn’s message, not least on Brexit – leading to his defeat in the 2019 general election – and demobilising and demoralising many who had joined the Labour Party to fight for anti-austerity policies.

As a result, many of the most combative and working-class Corbyn supporters have long since lapsed into inactivity in the Labour Party. Others – at the top – are developing their careers via incorporation into the pro-capitalist wing of Labour.

No doubt the voting figures include some right wingers who joined the party just to vote for Starmer. This is certainly true of the ‘registered supporters’ category.

Back in 2015, it was the registered supporters – then able to vote in the leadership election for just £3 – who set Corbyn’s campaign alight.

In 2016 too, as the campaign to defeat the ‘chicken coup’ against Corbyn raged, registered supporters again played an important role. 180,000 paid £25 over two days to sign up, overwhelmingly to vote for Corbyn.

However, the figures also indicate that many Labour Party members, including some of those who joined under Corbyn, voted for Starmer in the hope that a candidate that was more acceptable to the capitalist class – in reality more right-wing – would stand a better chance of winning a general election.

This can be no surprise. Given no lead, and demoralised by the 2019 defeat, they were only offered Rebecca Long-Bailey’s woeful campaign. The 29% of Labour Party members who voted for her did so, in the main, in order to try and stop Starmer, rather than out of enthusiasm for her.

She was dubbed the ‘Corbyn continuity candidate’. At no stage, however, did she challenge the relentless right-wing narrative that the general election result was the worst since 1935, despite Labour’s vote being higher in percentage terms than in 2010 or 2015.

She did not put forward the urgent need for Labour councils to stop implementing cuts, which was a major factor in workers’ distrust of Corbyn.

In addition, she accepted the witch-hunting charter of the Jewish Board of Deputies, setting the scene for further moves against the left in the aftermath of the leadership election. As a result she only received a total of 135,218 votes.

This marks a definitive end of the Corbyn era. The burning need for the working class to have its own political voice has not lessened, however, but increased. An urgent discussion needs to take place in the workers’ movement on how to bring a mass party of the working class into being.

In the five years after his leadership victory, the Socialist Party recognised that organising the forces that had crystallised around Jeremy Corbyn appeared the most viable route to achieving that.

We put forward a programme for transforming Labour into a mass socialist workers’ party, and argued that we should be allowed to affiliate to aid that fight.

Those that remain in the Labour Party have to draw a line in the sand, and fight tenaciously for socialist policies against the ascendant capitalist wing of the party.

Rather than accept pro-capitalist Labour politicians representing it, however, the labour and trade union movement, and socialist activists, must start a discussion now on the need for a new mass workers’ party with a socialist programme, and how it can be built.