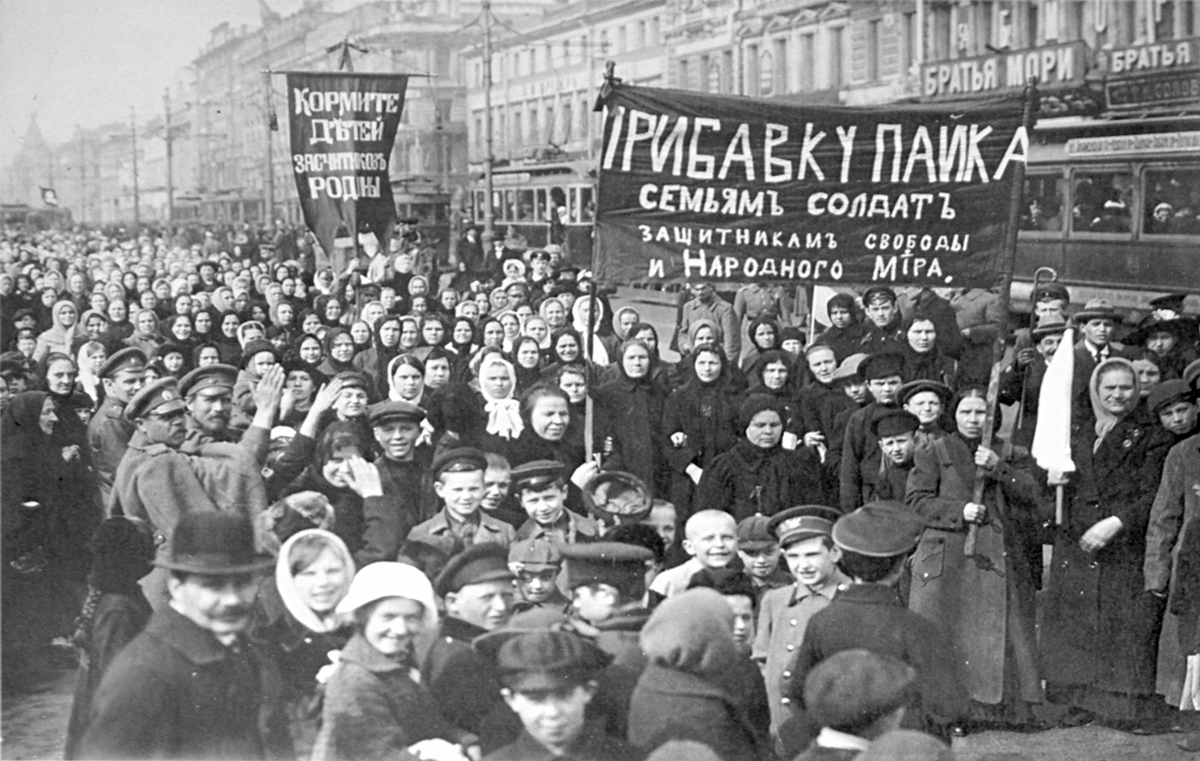 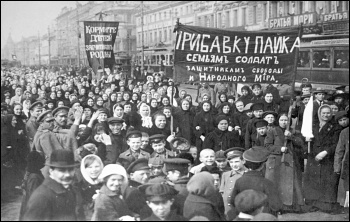 Workers demonstrating on the first day of the February revolution in Russia   (Click to enlarge: opens in new window)

In the third of a series of articles on ‘war, global crises and working class struggle’, Philip Stott – secretary, Socialist Party Scotland – describes how the horrors and privatiations of WW1 provoked revolutionary working class uprisings

“Nous sommes en guerre” – we are at war. Those were the words used by French president Macron recently to describe the coronavirus pandemic. Macron and the ruling elite he represents are not just referring to the current health emergency, but also the systemic threat it poses to the profit system of capitalism.

Covid-19 has many of the multiple features of a global war: tens of thousands have died, millions are, in reality, infected. Resource-starved healthcare systems are collapsing under the pressures of emergency hospitalisations. At least one-third of the world’s population is in lockdown. The global economy has fallen off a cliff.

In the US, those applying for unemployment benefits is expected to reach 20 million soon – on a par with the 1930s Great Depression.

As the American economist Nouriel Roubini recently pointed out: “Not even during the Great Depression and the World War Two did the bulk of economic activity literally shut down, as it has in China, the US and Europe today.”

Many capitalist commentators are also using wartime comparisons, warning of what could happen after the war is over.

These words from Swedish industrialist Jacob Wallenberg reflect the fears of the capitalist class that their system and rule is threatened, not so much by Covid-19 itself, but what it is revealing about the capitalist system and its inability to provide for the working-class majority.

The colossal fiscal, monetary and state interventions by central banks and governments are almost unprecedented. Yet they are unlikely to prevent a huge radicalisation and shift to the left, including towards class struggle and socialist ideas, in the aftermath of the crisis.

This is a key reason why a raft of emergency repressive legislation banning gatherings, demonstrations and potentially strikes has been enacted, which is due to last for up to two years.

War has long been described by Marxists and also accepted by the capitalists as the midwife of revolution. And for good reason. The 1905 Russian revolution erupted in the aftermath of the Russo-Japanese military conflict.

The February 1917 Russian revolution and then the Bolshevik-led October revolution, that created the world’s first workers’ state, grew out of the bloody carnage of the World War One. These events also sparked a revolutionary conflagration throughout Europe.

Red Clydeside, the period covering 1914-1919, was an heroic chapter written by the Scottish working class both during and after the world war.

While the current lockdown in Britain and across large parts of Europe makes it difficult to carry out widespread socialist activity just now, we can take inspiration from how Marxists and socialists did so at the start of the war in 1914.

Sometimes socialists need to swim against the stream, even if it seems like a tsunami.

The Scottish Marxist John Maclean rapidly emerged as a leader of the anti-war struggle (in WW1), and as an implacable fighter against capitalism and in defence of the rights of the working class. In this he stood alongside Lenin and Trotsky in Russia, Rosa Luxemburg and Karl Liebknecht in Germany, and James Connolly in Ireland.

Maclean and the Glasgow branch of the British Socialist Party organised regular street meetings and sent speakers to the engineering and munitions workplaces, not an easy task given the jingoism that existed at the start of the war.

The famous weekly Sunday night anti-war public meetings in Bath Street also began. First of all a few hundred attended but as the anti-war mood deepened it grew to thousands to hear Maclean and others speak.

By February 1915, rumblings of discontent had broken out on Clydeside. A labour shortage gave the workers confidence that they should act, and strike action began.

Much like today, as workers take part in walkouts to demand bosses and employers accept social distancing policies and provide protective equipment, this was unofficial action organised by the shop stewards of what became the Clyde Workers Committee.

In contrast, the then Trade Union Congress (TUC) had agreed a policy of ‘industrial peace’ for the war effort. Moreover, strikes were illegal under the Defence of the Realm Act – a faint echo of today’s current emergency legislation.

During the war, pressure on housing was immense. The landlords and their factors (landlords’ agents) saw an opportunity to squeeze more money from tenants and started to raise rents in 1915.

Most immediately impacted were working-class women. Mass anger ignited into a campaign of non-payment of the rent increases, with women playing the leading role. Attempted evictions by sheriff officers (bailiffs) were stopped by mass mobilisations of the local community. This is something that can be taken up today if landlords threaten evictions for non-payment of rent.

In October 1915, 25,000 marched in Glasgow against the rent rises. The involvement of Maclean and other BSP members meant that the campaign was taken into the shipyards and engineering factories.

Faced with being unable to either collect the rents or evict tenants, the government and factors went for wage deductions instead. 18 shipyard workers were summoned to the court on 18 November 1915 to have their wages arrested for non-payment of rent.

John Maclean was imprisoned a number of times for his anti-war activities. His famous speech from the dock in 1918 rings true today: “I am not here, then, as the accused; I am here as the accuser of capitalism dripping with blood from head to foot”.

The 1917 May Day demonstration in Glasgow saw 80,000 marching in solidarity with the Russian workers who had recently carried out the February revolution, against war, and demanding the freedom of John Maclean.

Demands for real improvements after the war, the impact of the Russian revolution, and rising industrial unrest, combined to pose a real threat to British capitalism. The demands for a shorter working week resulted in a mass strike wave.

A general strike was also called for 24 January 1919. On that day, tens of thousands of workers from all the main yards and engineering shops in Glasgow came out on strike.

Later that day, the Battle of George Square erupted as police were sent in to attack the workers.

The then secretary of state for Scotland, Robert Munro, said: “It is a misnomer to call the situation in Glasgow a strike – this is a Bolshevist uprising.”

Today world capitalism, already in a weakened state following the decade long post-2008 depression, is set to lose even further legitimacy in the eyes of millions.

Support for mass working-class struggle and socialist planning in the aftermath of the Covid-19 pandemic will become increasingly seen as viable and attractive.

It is that perspective that the Socialist Party and the Committee for a Workers’ International will fight to make a reality.