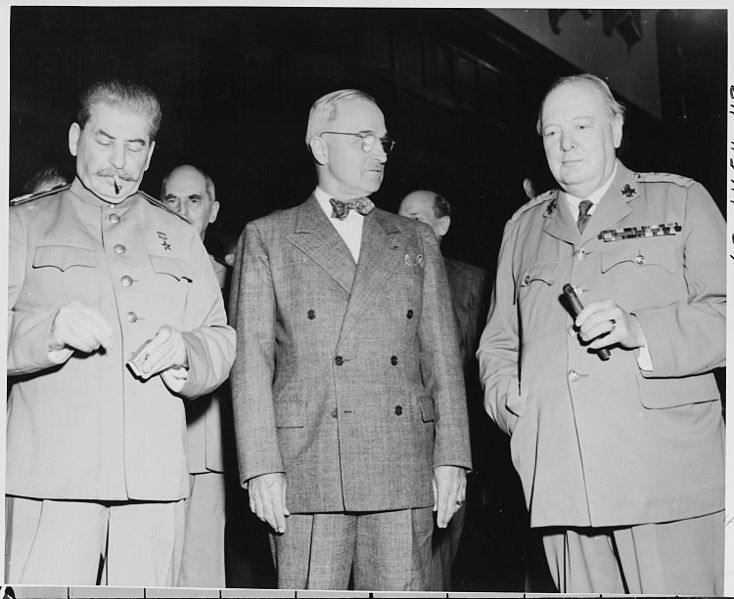 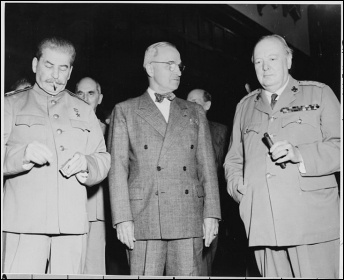 Russian leader Joseph Stalin, US president Harry Truman and British prime minister Winston Churchill in 1945 on the eve of the new ‘Cold War’ which rapidly emerged between US imperialism and the Soviet Union   (Click to enlarge: opens in new window)

During the Covid-19 crisis, many commentators have talked about a ‘new Bretton Woods’ and the need for post-crisis international capitalist cooperation and reconstruction. In the fifth in our series on ‘war, global crises and working-class struggle’, Robin Clapp looks at reconstruction and global relations after the Second World War and the lessons for today.

The United States emerged from the carnage of World War One immeasurably strengthened, both economically and militarily. The socialist revolutionary Leon Trotsky, in a speech analysing inter-imperialist and global relations in July 1924, observed: “For the master of the capitalist world – and let us firmly understand this! – is New York, with Washington as its state department,” adding that despite “draping itself in the toga of pacifism, American capitalism is seeking the position of world domination; it wants to establish an American imperialist autocracy over our planet. That is what it wants.”

20 years on, Trotsky’s prophetic words were further borne out by the decision of American imperialism to take the controlling role in reshaping the world economy and geopolitical affairs in the form of the installation of the Bretton Woods financial agreement in 1944, the Marshall Aid Plan four years later, and the North Atlantic Treaty Organisation (Nato) in 1949.

America’s ruling class chose an isolationist path after 1918, largely cutting itself off from any involvement in assisting war-torn Britain and France, both struggling with unpayable war debts that dragged their economies into deep and persistent recessions.

As the world’s undisputed economic colossus after 1945, the US now realised that it must move quickly to stabilise Europe and Asia. The first step was taken even before the end of the war, in July 1944, with the ratification of the Bretton Woods agreement.

The dollar became the world’s new reserve currency with a fixed relationship to gold at an exchange rate of $35 to an ounce. Massively benefiting US imperialism, the dollar was now “as good as gold”, and had additional qualities in that it could earn interest and was more flexible than the precious metal.

Other capitalist countries were powerless to stop the imposition of the dollar’s new status. Members of the Bank of England smarted at the indignity of seeing sterling lose its former preeminence as the world’s ‘most trusted currency’ with one claiming that Bretton Woods represented “the greatest blow to Britain next to the war.”

Bretton Woods paved the way for the setting up of the International Monetary Fund and the World Bank, institutions still functioning today. Despite the eventual break-up of the Bretton Woods monetary system in 1971, as the post-war boom was stuttering to a halt, these still act largely under the guidance and interests of American imperialism as financial instruments dictating capitalism’s agenda on its 189 participants.

‘Europe must be made stable’, was the cry echoing from the White House to the Pentagon. They were fearful of the emergence of a strengthened Stalinist Soviet Union, a temporary wartime ally after 1941, but beginning to be perceived again as a dangerous geopolitical adversary. It had begun to massively develop its influence in eastern Europe and would, over the next few years, draw into its sphere Poland, Hungary, Czechoslovakia, Romania, Bulgaria and, most decisively, the eastern part of dismembered Germany.

The new ‘Cold War’ rapidly emerging between US imperialism and the Soviet Union, the former based on capitalism, the latter on a bureaucratic planned economy, was a crucial impetus to the unveiling in 1948 of the European Recovery Programme, popularly known as the Marshall Aid Plan, and a year later the formation of Nato.

Marshall Aid provided US assistance to 16 countries, with Britain receiving around 25% and France a further 18%. It was seen as vital too that West Germany be rescued in order to restore stability – unlike in 1918 when the German republic, still engulfed in the flames of social revolution, was deemed responsible for the war, and made to pay crippling reparations enshrined in the 1919 Treaty of Versailles.

The Marshall Aid programme helped to stimulate demand, and by 1952 European industrial output had grown by 35%. A little acknowledged fact is that the CIA (US spy agency) received 5% of the total funds allocated through this policy, using the money to establish ‘front’ businesses in several European countries in order to further assist in neutralising the Soviet threat, creating pliable trade unions, and blacklisting suspected ‘communist agitators’.

Today’s landscape is very different. US capitalism, already weakened by the 2007-2009 crisis, is unable to play the same dominant economic and geopolitical role as in the post-war period. And the ideas of neoliberalism, which have dominated economic thinking over the last 30 years, now lie in tatters as Covid-19 threatens to plunge the world economy into the deepest crisis since the 1930s.