Editorial of the Socialist issue 1093 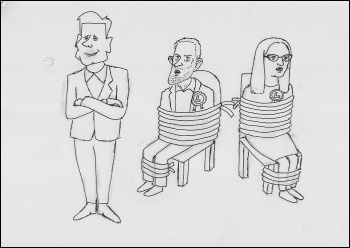 Some Labour lefts say they will   (Click to enlarge)

When Keir Starmer was elected Labour leader the Socialist Party warned that it represented "a qualitative step in the capitalist class's campaign to make the Labour Party once again, as it was under Blair, a reliable vehicle for their interests."

During his leadership campaign, Starmer had to hide his pro-capitalist agenda behind the banner of unity in order to win. Now, however, his claims to want unity, always risible, have been decisively ripped apart by his summary sacking from the shadow cabinet of Rebecca Long-Bailey - previously the left-backed candidate for Labour leader.

Long-Bailey's supposed crime was to retweet a long interview with Labour Party member and actor Maxine Peake which contained the claim that "the tactics used by the police in America, kneeling on George Floyd's neck, learnt from seminars with Israeli secret services."

Peake has since retracted the statement, and Long-Bailey has clarified that she does not agree with all the views contained in the interview. Regardless, however, Starmer seized on the chance to sack Long-Bailey and step up the campaign to falsely argue that antisemitism is particularly prevalent on the left, when in fact it is far more common on the right.

In reality, sharing methods of coercion is normal between the security forces of the major capitalist powers. According to Channel 4's 'FactCheck', the Israeli consulate in Chicago did run training seminars attended by Minnesota police. While there appears to be no evidence to suggest that 'neck kneeling' originated in Israel rather than the US or elsewhere, the Israeli state employs it in the occupied territories as part of its panoply of repressive measures.

The anger of many on the left, including Jewish and Israeli activists, at the brutality of the Israeli state is not fuelled by antisemitism, but opposition to its barbarous treatment of the Palestinian people.

Unfortunately, as so many times before, the Labour left has responded to Starmer's attack by retreating. Jon Lansman, founder of the pro-Corbyn group Momentum, pleaded with Starmer to "build trust" with the left, while emphasising that he had "every confidence" Starmer could maintain "party unity". This, Lansman claimed, is essential because "divided parties don't win elections".

The fact that Johnson won a majority government with a completely divided Tory party passed Lansman by as he begged Starmer to leave room for the left within Labour. The pro-capitalist wing of the Labour Party, however, will only be happy with leaving room for the left if, as under Blair, the room is a prison cell from which they can do no more than smuggle out the occasional note.

The Labour right and the capitalist media spent the five years Corbyn was Labour leader attacking him for being factional and divisive. In reality, however, he made the opposite mistake, continually making concessions to the right in the hope of pacifying them, and allowing them to continue to dominate the parliamentary Labour Party, the Labour machine, and the council chambers. The right, backed to the hilt by the capitalist class are, by contrast, entirely ruthless.

Kate Green, who has replaced Long-Bailey as shadow education secretary, was one of the organisers of the attempted coup against Corbyn back in 2016. She wrote scurrilous articles attacking Corbyn for allegedly not understanding women's oppression, and managed Owen Smith's right-wing leadership bid.

Immediately on being appointed by Starmer, Green made a statement about "getting our children back in school as soon as possible". This was a conscious signal that Labour was acceding to the demands of Boris Johnson and the right-wing press that it disassociate itself from the education unions' campaign for safety to come first. The fact that Long-Bailey was considered too sympathetic to the unions' campaign over school safety was a factor in her being sacked.

These developments pose an urgent question for all trade unionists. How are they to have a political voice? Capitalism is in crisis. It is offering the working-class majority a diet of misery. Mass unemployment, pay cuts, and further cuts to already decimated public services are all on the agenda, alongside further risks to health as a result of capitalism's inability to deal with Covid.

The absence of a political voice for the working class is being shown graphically at local authority level. The Tory government has spent over £29 billion on bailing out the economy, but it has left councils with an estimated £6 billion shortfall, resulting in local services, including social care, facing a catastrophe.

What has been the response of Keir Starmer's Labour Party which leads a majority of these councils? Have they made a joint declaration demanding the necessary funds from central government, refusing to implement any cuts and pledging to defend their local communities? Of course not.

Instead, Steve Reed, Labour's shadow secretary of state for communities and local government, bleated inaccurately and weakly that "by law councils will be forced to make devastating in-year cuts that will see frail older people denied care, libraries and leisure centres shut for good and bins left unemptied."

Similarly, Sadiq Khan, mayor of London, despite being in an extremely powerful negotiating position given the necessity to capitalism of the London transport network, passively accepted a wholly inadequate funding package for Transport for London from central government, which will threaten safety, jobs and fare increases.

It could not be clearer that this Labour leadership has no intention of organising a struggle to defend the health, jobs, pay, and services, of working-class people. Rather, they will do the bidding of the Tory government and the capitalist class, just as they are doing on council cuts and school reopening.

The need for the trade unions to organise a battle to defend workers' interests is clear. To do so without a political voice, however, is to fight with one hand tied behind our backs.

That is why the Socialist Party is urgently raising the need for the workers' movement to discuss how to solve the crisis of political representation, by taking steps to towards building a new mass workers' party with a socialist programme. One vital step in that direction would be to organise the widest possible number of anti-cuts candidates in next May's local and mayoral elections.

Some socialists remain in the Labour Party. They have to draw a line in the sand and fight tenaciously for socialist policies against the ascendant capitalist wing of the party, not least for the selection of anti-cuts candidates. A strong anti-cuts campaign outside of Labour can only assist their struggle. However, it is clear that in most areas Labour council candidates will be dominated by the right.

The workers' movement therefore needs to ensure that it finds another route to standing candidates who are prepared to lead a fightback against Tory misery.