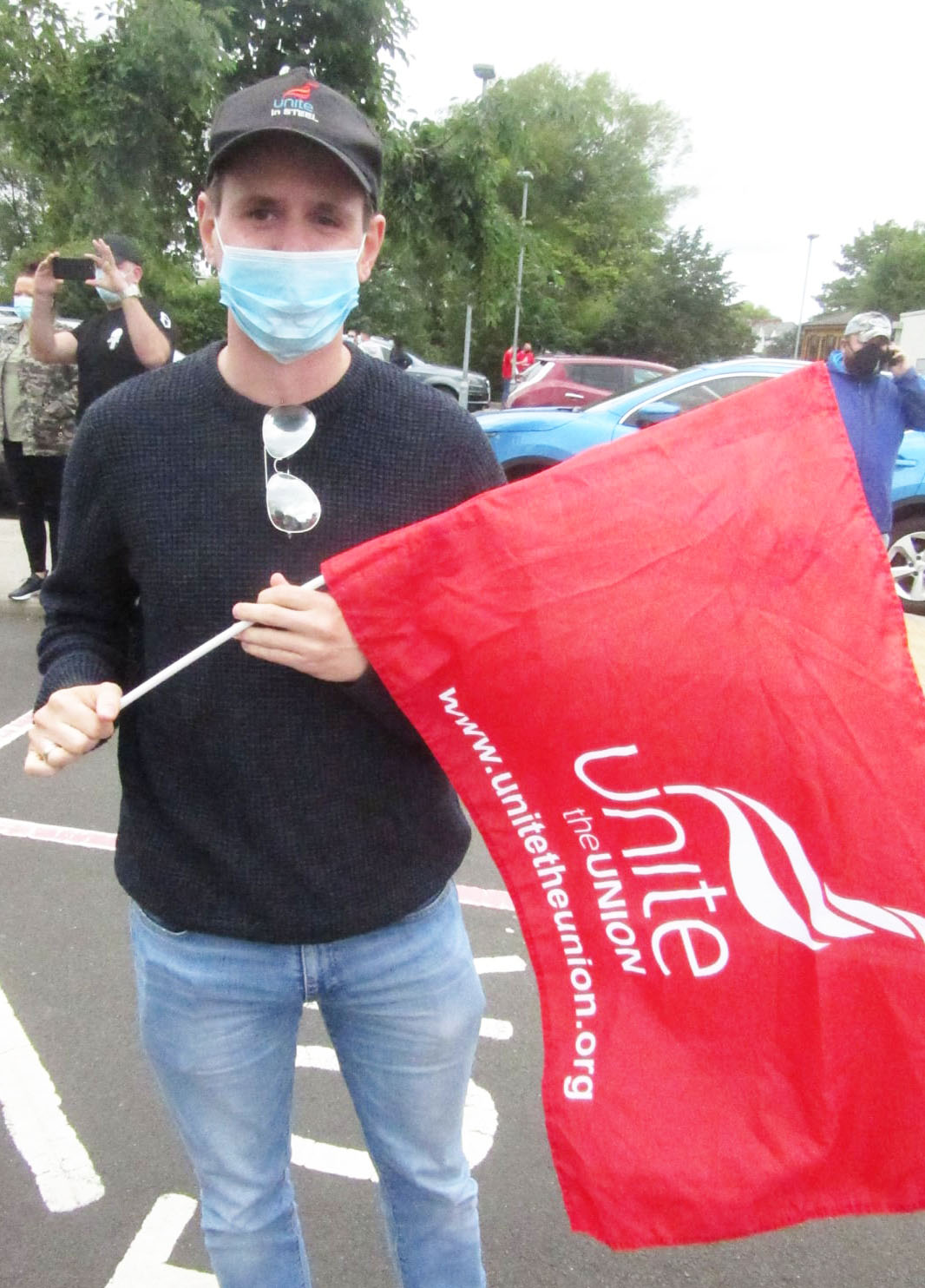 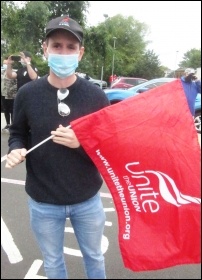 Holding a Unite flat at a protest rally of Nissan workers outside their Sunderland plant. 11.7.20, photo Elaine Brunskill   (Click to enlarge: opens in new window)

Supporters of United Left, in the union Unite, are meeting virtually on 18 July to select the group’s candidate for the next general secretary election, which must take place by early 2022 at the latest to replace Len McCluskey.

In 2010, Len McCluskey was elected as the first general secretary of Unite after it was formed by the merger of the Transport and General Workers’ Union and Amicus. He defeated the right-wing candidate Les Bayliss in what was seen as a victory for the left that offered a way forward for the new union.

The impending general secretary election will take place as a new, even graver crisis unfolds. The Covid-19 pandemic has put all trends in the union movement to the test. As with a war, many of the union leaders have succumbed to the ‘national unity’ pressure to lower their demands and stop action in the ‘national interest’. This has also been reflected in the slowness of the unions to mobilise sufficiently when the Black Lives Matter movement broke out, being constrained by the lockdown.

But now we have clearly entered a new phase of the pandemic – an economic crisis with closures and mass redundancies threatened. This shows that the Tories and the bosses feel only a class unity against workers and their unions.

Unite is the main union in British Airways facing a brutal assault by management, which is trying to seize this opportunity to smash the unions and their members’ jobs and contracts.

The crisis can deepen the pessimism of some leaders, leading them to call for partnership with the Tory government and the employers as the only realistic solution, especially when a hurricane of job losses faces them. But the crisis doesn’t mean that it is impossible to fight, only that it must be on a far higher level – both industrially and politically. The starting point for the movement must be that workers cannot pay the price for this new phase of capitalist crisis.

This emboldened the Tories to roll out huge cuts, particularly in local government. But here too, the Labour-affiliated unions failed to sufficiently campaign to put pressure on Labour councils to refuse to pass on Tory cuts, even during Jeremy Corbyn’s leadership.

One of the exceptions to this was in the 2017 Unite binworkers’ dispute in Birmingham. Union assistant general secretary and acting Unite West Midlands regional secretary, Howard Beckett, went to the Trade Union Congress and Labour Party conferences to denounce cutting Labour councillors as being the same as Tories.

Sharon Graham has also said, “We cannot willingly allow Labour politicians to heap austerity upon austerity. We should not turn a blind eye to Labour cuts. The excuse of a Labour cut being ‘better’ is just nonsense. We must do everything in our power to defend both our members and the services they provide. If this means taking on Labour Councils then so be it.”

Similarly, at Grangemouth in 2013, Unite was unprepared for the scale of action needed in the face of the brutal management of Ineos under the billionaire Jim Ratcliffe, one of Britain’s richest men.

Five years before, the union had defeated Ineos’s attempt to end the final salary pension scheme. When the company went back on the attack, Unite called strikes, which they backed with a leverage campaign. But Ratcliffe went nuclear by threatening a ‘cold shutdown’, which would have put the plant’s future on the line.

Faced with this deadly threat, without a clear answer from Unite’s leadership, there wasn’t the confidence to continue the action. This setback was seized upon by Ratcliffe to go after the union and its two leading convenors.

The union under McCluskey also played a key role in supporting Jeremy Corbyn’s leadership of the Labour Party. Actually, the Blairites saw winning the previous union general secretary election in 2017 as a key part of their plan to seize back control of Labour, backing the candidacy of Gerard Coyne.

The Socialist Party gave critical support to Len McCluskey as his election victory, by a narrow margin, pushed back the right-wing in Labour. In the aftermath of Starmer’s victory, it is entirely possible that the Blairites will again stand a candidate for Unite general secretary to seek to consolidate their position in Labour, which should be a consideration for prospective left candidates on a fighting programme.

But the four and a half years of Corbyn’s leadership were ultimately a missed opportunity to transform Labour into a party that could be a political vehicle for working-class people. This would have needed the reversal of the undemocratic Blairite measures that crucially weakened the collective power of the unions in the party.

Also, despite Unite policy for mandatory reselection of MPs – due to a motion moved by a Socialist Party member at the union’s 2016 policy conference – it wasn’t implemented in the party. The Blairites kept their grip on the Parliamentary Labour Party, and used it to sabotage Corbyn’s leadership.

These mistakes helped lead to the election of Starmer, which was a defeat for the Labour left, and a victory for the capitalist establishment in their project to restore Labour as a reliable vehicle for them. The pandemic has shown all too clearly that this is vital for the capitalists, as Johnson’s government lurches from one crisis to another.

But what must unite the left within and outside Labour is an industrial and political challenge to pro-capitalist, pro-austerity forces standing in Labour’s colours. This starts with refusing to cover for the likes of London Labour Mayor Sadiq Khan and Labour councils which take on their workforces by implementing Tory cuts.