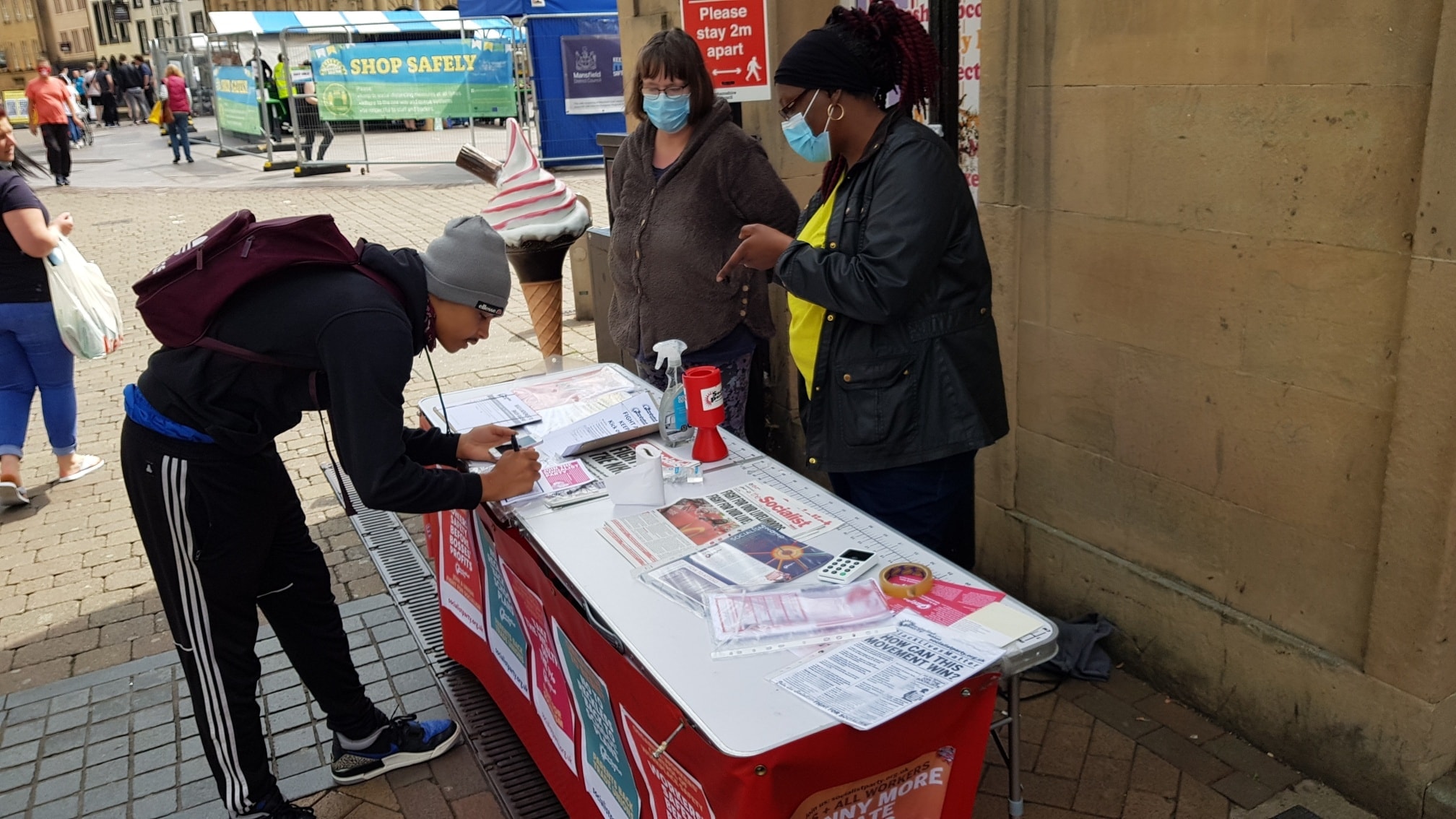 All over workers are angry 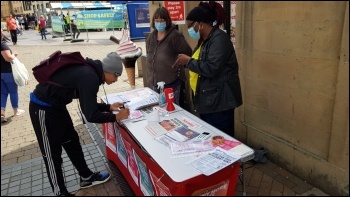 Anger is deepening in London about the way workers have suffered disproportionately. We told people we will be challenging in the elections next year.

We met one bloke who said he worked in emergency housing and yet still can’t get a home, even though he doubles up as a bouncer in a club. There is some reckoning coming.

It’s quite difficult for people to see us smiling under our masks, it looks like we’re staring them out, but we had a captive audience queuing to get into McDonald’s.

After almost four months it was good to get back on the streets on 25 July.

One woman told us the company she works for was always telling employees that they were part of the company’s family. But that has now gone out of the window. Their boss sacked them via email.

On 1 August we went out onto Northumberland Street to stand for decent pay and jobs, as well as demanding that the price for coronavirus doesn’t fall on workers’ backs. We heard from workers that were in fear of losing the precarious work they had, plus those that had already been made redundant.

Young workers, in particular, were furious about unpaid internships, insecure work, and lack of prospects. One mentioned that a part-time role he was looking at had 700 applicants.

They all agreed that the fact they were nervous about not having an income, while the profits of their bosses rose, showed a real problem in the system. As the crisis deepens we’ll continue to push for a socialist transformation of society, to stop the greed of the bosses and bring power back to the working class.

It’s great to be back on the streets of Sheffield, campaigning for the NHS, jobs and homes, against racism, and to get the Tories out. An ex-Labour member and a 15-year-old school student signed up for invites to our next meeting.

We had three Socialist Party campaign stalls, for the first time since lockdown. In Swansea campaigning against the jobs massacre and attacks to the NHS; a Young Socialist stall against youth unemployment and racism; and in Port Talbot calling for the nationalisation of Tata Steel and the protection of those skilled jobs.

Still buzzing after our best response on a stall since lockdown began. It was great to be joined by a new member and a non-member who joined the Socialist Party straight after the stall.

We’re inspired by everyone that comes up to support us. Lots of support from working-class people from all over in the city centre and in Acocks Green, south Birmingham, for our campaigns on affordable housing, living-wage jobs, fully funded public services, and to demand workers don’t pay the price for Covid.

On our first Socialist Party campaign stall in the city centre since lockdown, we campaigned for a pay rise for NHS workers, a properly fund NHS and against privatisation.

Too many places to mention

Between 25 July and 1 August, Socialist Party members were also out campaigning in Tooting against the jobs massacre, in Worcester for workers’ rights, and in Cardiff in support of 250 Wales Millennium Centre workers fighting to save their jobs.

In Bradford we were agitating against NHS cuts and privatisation, demanding a pay rise for staff. In Nottingham we called for jobs and homes for all to oppose the far right planning to come to the city on 22 August.

Bumper Southampton Socialist Party stalls called for a massive increase in the minimum wage and NHS workers’ pay, the renationalisation of the service – kick out the privateers.