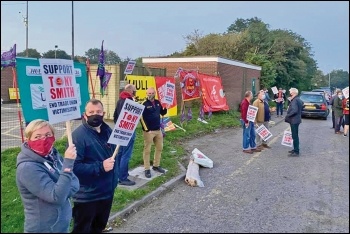 As The Socialist goes to press, sacked Unison rep Tony Smith in Hull has attended his appeal hearing, accompanied by supporters fighting for his reinstatement. Tony is a Unison union activist and was sacked for 'gross misconduct', but in reality he has been victimised for trade union activities.

All of Tony's fellow drivers at the FCC waste disposal plant at Wilmington agreed that Tony made a correct health and safety call, but this was ignored in a blatant stitch up by management. Tony led the successful strike two years ago which won sick pay rights for 2,500 FCC workers up and down the country. See next week's issue for the outcome of his appeal.