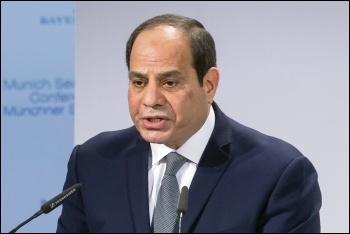 A list of non-voters has been sent for prosecution. Fines of up to LE500 (£24.50) can be issued; the equivalent of one week's legal minimum wage. But with 54 million people on this list, it is unlikely many will pay!

The Senate is a toothless 'advisory' body set up by al-Sisi, who appoints 100 of its 300 members. This election, like the regime as a whole, is reminiscent of the sham elections held under former President Hosni Mubarak, who was ousted by a mass uprising in February 2011.

Last year, al-Sisi engineered a change in the constitution to allow him to remain president until 2034, following the examples of Erdogan in Turkey and Xi Jinping in China. But the 2011 uprising remains a tremendous reminder of the power of mass movements to bring down dictators despite their armed state machines.

Brutal stamping down on the opposition is even worse under al-Sisi than under Mubarak.

Opponents are described and treated as "terrorists". On 25 August, el-Din Hassan, a prominent human rights activist, was sentenced to 15 years jail by the counter-terrorism court created in 2017.

Normal judicial processes do not apply in the court and there is no right of appeal. El-Din Hassan commented on Twitter and at UN human rights meetings about the justice system's failure to hold state officials accountable for widespread killings, torture, and disappearances since al-Sisi took power in 2014. Bahei el-Din Hassan lives in exile, but thousands of other less well-known activists suffer in prison.

Critical journalists and TV presenters have been fired. Three young women TikTok 'influencers' with followings of up to 1.3 million were arrested. The regime is fearful of any possible avenues for public dissent.

During the coronavirus lockdown, many children flew kites. State authorities worried these could be used to fly banners or cameras, banning them in July. Hundreds of kites were confiscated in Alexandria and Cairo, and parents fined up to LE1000!

In September 2019, protests broke out on the streets after one disaffected Egyptian businessman living in Spain posted on Facebook his account of the corruption of Egyptian state officials. Everyone knows that corruption has continued since, despite the occasional example of a high-profile businessman linked to the Mubarak family being prosecuted.

Al-Sisi's regime rests on support from senior military officers. The armed forces have considerable business interests, which sometimes conflict with other sections of the capitalist class who were close to Hosni Mubarak and his sons.

The government approved just one private company to carry out paid-for Covid-19 testing - 'Prime Speed Medical' - in which Tamer Wagih is a major investor.

He was an executive of al-Sisi's 2014 election campaign and now chairs the university hospital council with links to the ministry of higher education, which indirectly oversees Prime Speed Medical's testing.

By the end of August, there had been almost 99,000 cases of Covid-19 and almost 5,400 deaths, according to official figures. These are almost certainly underestimates - Egypt's under-financed health services cannot test or treat all those who are unable to pay for health care. Health workers who spoke out about PPE shortages have been threatened, and at least nine arrested between March and June.

While some of al-Sisi's cronies are making money from the pandemic, millions of low-paid public sector workers have had a 1% pay cut. Pensions were cut 0.5%. Electricity price subsidies have also been cut. Hundreds of thousands of jobs have been lost in tourism-related industries.

Five-and-a-half million Egyptians work abroad. Many were furloughed or lost jobs and were unable to send money home to support their families.

In late August the regime started demolishing thousands of illegally built homes unless residents pay expensive fees. Tens of thousands of families face sudden homelessness, some after living in their homes over forty years.

Meanwhile, unused industrial land is to be exempted from real estate tax - a key business demand in recent years.

Egypt's huge state debt means the government aims to keep the budget deficit down to a level that allows it to borrow on international markets without sky-high interest rates. Foreign investors withdrew 50% of their Treasury bill holdings between February and March this year. International Monetary Fund loans, totalling US$8billion this year, come with conditions - more privatisation and public spending cuts.

Workers organising together to demand better pay and decent public services would threaten big business' profits and the foreign investment the government is desperate to retain.

Egypt's large and potentially powerful working class has been unable to make its voice heard, so far, under al-Sisi's iron-fisted regime. But just as Mubarak found out, anger and resentment building below the surface can eventually erupt like a volcano. Despite the present dangers and difficulties, workers need to organise.

A key lesson of the 2011 uprising was that workers need their own political party so that the working class can act together, for their own interests, and draw behind it other poor and oppressed people.

Building a mass party under conditions of military repression is extremely difficult, but activists can start to assemble the framework upon which such a party could rapidly develop when conditions change.

Discussion is vital to draw up the socialist programme necessary to make real and lasting change for Egypt's workers and youth and how to relate it to their issues of daily concern. Not only Egypt but the whole Middle East and North Africa desperately needs socialism and workers' democracy.