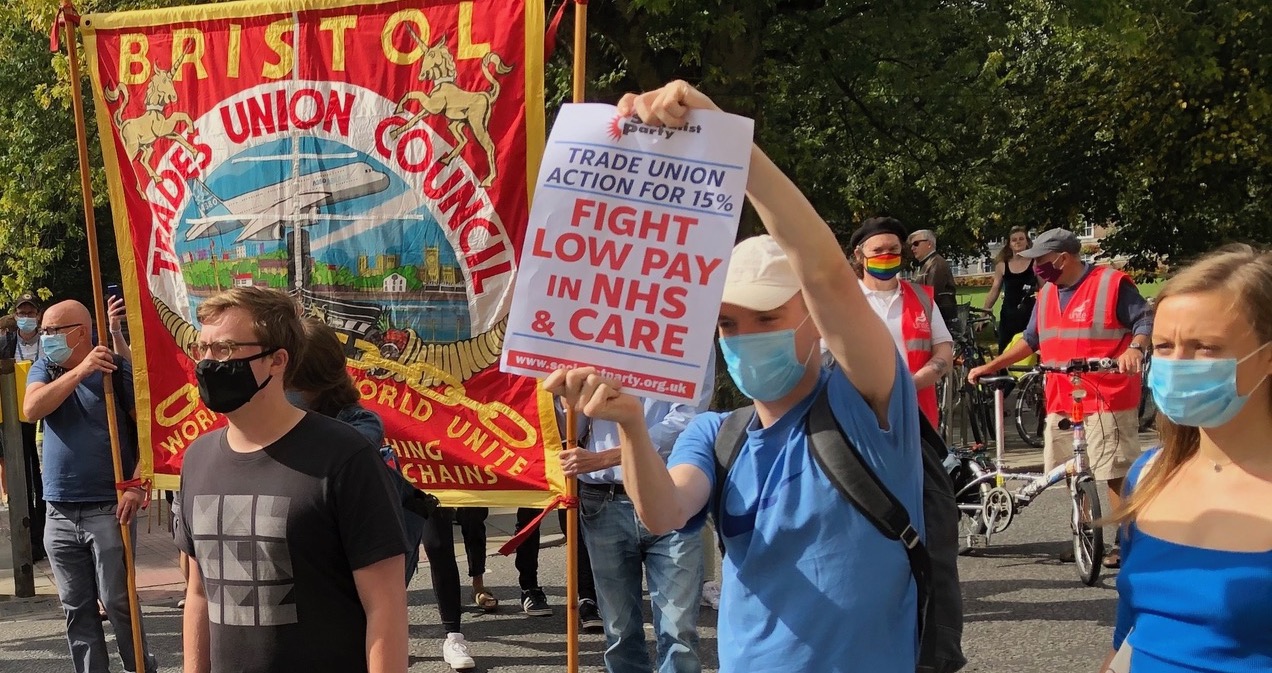 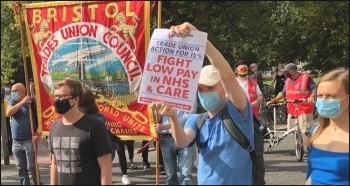 Kirsty Brewerton, an NHS clinical sister and activist in the ‘NHS Say No’ campaign, spoke about their fight for a 15% pay rise at the National Shop Stewards Network rally before the Trade Union Congress on 13 September.

Our campaign grew through years of frustration with politicians only using us and our profession to win votes and their promises as hollow as their Thursday claps. When it was announced that most nurses were not included in the latest public sector pay increases, they lit the torch. And an uprising like I’ve not seen in my nursing career erupted – a reaction to the constant hammering from this Tory government.

What began as a Facebook group of incensed members has become a group of 85,000 members. We’ve marched and protested and the message is the same – 15% pay increase for all NHS workers.

The response from Matt Hancock and the government is to remind us of this scam they call a three-year pay deal. Which we should all apparently be grateful for. The manipulation of maths by this Tory government is astounding – always skewed to paint a picture to fit their rhetoric.

However, they are trying to manipulate the wrong workforce. We’re pretty good at numbers. If we fiddled the maths like they do, our patients would pay the price. We are left disputing those in power regarding this supposed pay deal and it’s been eye-opening to see this blatant manipulation of facts.

The pay deal was skewed to be beneficial to newly qualified staff, those more experienced hardly felt an increase at all. This year it will be just 1.7% for most staff which is a long way off 15%. And it’s nowhere near in line with inflation.

Hancock conveniently left out that ministers have awarded themselves an eighth pay rise in a decade of austerity. And their Covid bonus of £10,000, plus thousands in expenses.

Following the pressure from NHS Say No, the unions have begun to align their campaigns. GMB is now calling for 15%, Unite too, RCN 12.5%, and Unison is asking for £2,000 for each worker. While this is positive, it is not enough. We all need to be singing from the same hymn sheet and working together. This government cannot be given an excuse to manipulate the numbers.

We are so much stronger together. For a long time we felt disempowered, disillusioned and despondent. But we have proved that we do have a voice.

For years the NHS has been desecrated by the Tory government, slowly and slyly picked apart, chronically underfunded and undervalued.

The entire NHS workforce has proven that despite this, when faced with a global pandemic we can adapt and overcome.

Despite their failings, we battled on with inadequate PPE, risking our lives to save others while procurement of essential equipment by corrupt contracts was procured purely through nepotism.

Mates’ rates where I’m from usually means you get a bargain rather than wasting billions on non-existent or useless products. Yet there is apparently no money left for a pay rise for NHS workers. The hypocrisy is unreal. Rather than investing in their mates hair-brained schemes – invest in the experts who have been doing the job for years.

Without us there is no NHS. We are already 100,000 members of staff short. For the skills and experience we need – we deserve a fair wage. Claps don’t pay the bills and our pay deal is a farce. Stand with us and fight for 15%.