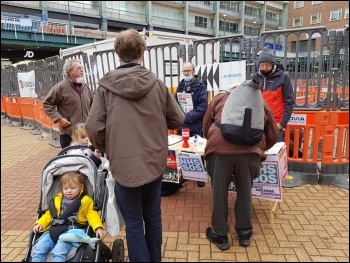 On 17 October, the Socialist Party brought two campaign stalls to campaign to end hospital parking charges. One resident came over infuriated. He has to pay up every time he visits his mum dying of cancer.

Another signed as soon as we told him the money doesn't go back into the NHS. Private companies made £7 million profit off the people of Coventry and Warwickshire last year from hospital car parks. A healthcare assistant told us they used to tailgate to ensure they could get into work, because they could not afford the charge.

People were angry. They were angry at the lack of support, sick pay, healthcare and jobs.

They were angry, and the Socialist Party reflected that anger and articulated a way out - proper sick pay, a programme of public works to create jobs, good jobs. Build council homes with rents workers can afford.

And come to our protest on 24 October, 1pm, Walthamstow Town Square.

We said if Boris Johnson is going to lock us up, he's going to have to pay up. That went down well.

You can meet the Socialist Party regularly campaigning in Waltham Cross. We call for a 15% pay rise for NHS workers. Each week the response is better and better. 17 October was the best yet.

When we said: "The government has refused to give NHS workers a pay rise, but MPs have given themselves a pay rise", the response more often than not was unprintable

Our best Saturday campaign stall since lockdown. And we met another three young people interested in joining the Socialist Party.