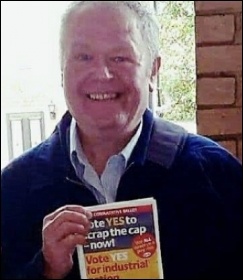 Richard Edwards, retired former Eastern PCS regional secretary, says: “I first met Paul when he joined the PCS regional committee as an elected member. He was renowned for his passionate anger at injustice and for his deep socialist beliefs. Despite suffering from his combination of illnesses he maintained a sense of optimism and quiet humour. I will not forget him.”

Chris Baugh, former PCS assistant general secretary, said: “After his brave fight against illness, it is a sad moment to lose such a principled and warm-hearted comrade as Paul Chettle.

“I had the honour of getting to know Paul through his tireless work as a PCS rep in HMRC and as an active Socialist Party member both in his union and his community. My condolences to his partner, his family and his wide circle of friends. RIP friend and comrade Paul Chettle.”

Marion Lloyd, PCS national executive committee member (speaking in a personal capacity) said: “Paul was a dedicated socialist, a great person and true to his convictions. It never ceased to amaze me that, despite his illness, he not only supported me, but also encouraged others to do so, when I stood for general secretary. A committed socialist to the very end. I already miss him!”

Rachel Heemskerk, PCS Eastern regional chair (speaking in a personal capacity) said: “Paul was an active member of PCS in my region and had the interests of our members at the heart of everything he did. Personally, I will miss the comradeship he gave me and his support during long Trades Union Congress regional council meetings, where his humour kept me going.”