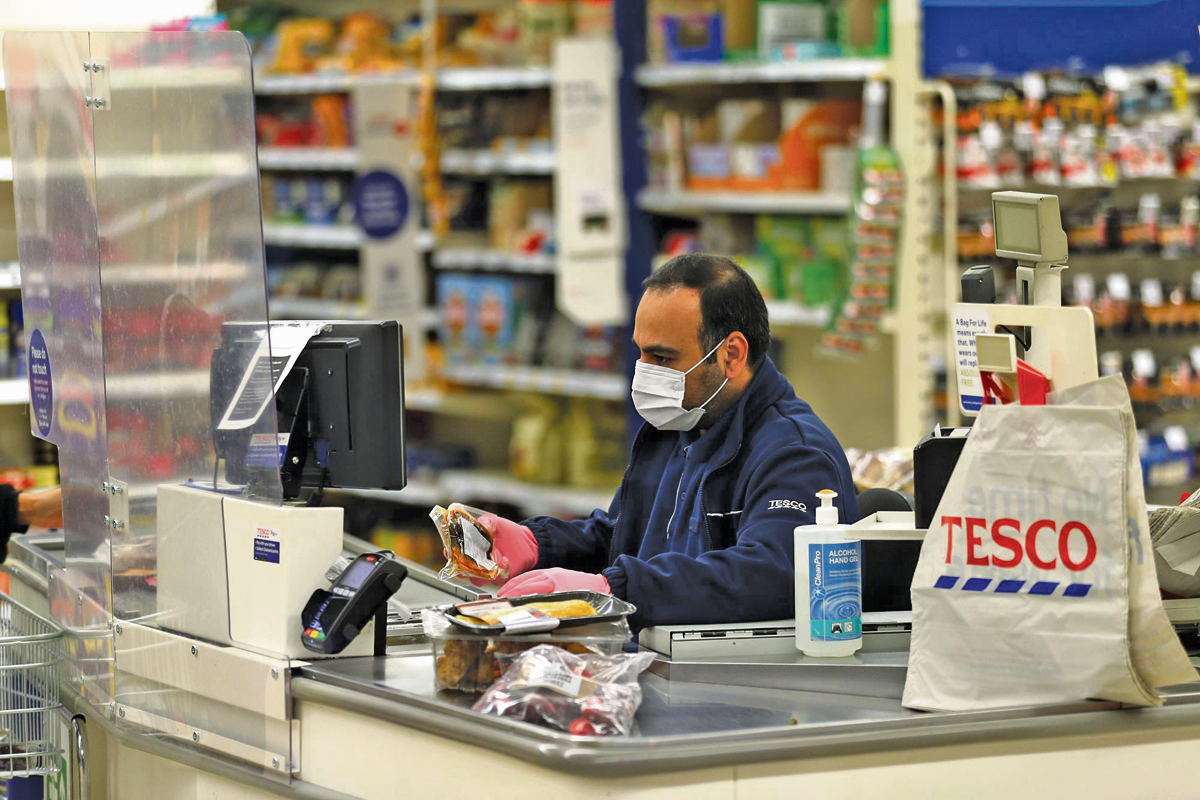 Bar worker John Williams, a Socialist Party member in Cardiff, spoke at a protest to oppose the pay freeze in the public and private sector on 5 December. Here is part of his speech.

Hospitality has been one of the worst effected industries during the Covid pandemic.

There were over 30,000 job losses at the beginning of the crisis. Many weren’t eligible for furlough. Hours were cut drastically and people were sent home early as demand plummeted

Then we had Boris Johnson and First Minister for Wales Mark Drakeford playing with our lives. They refused to shut down pubs – a breeding zone for Covid – despite the farce of Boris Johnson advising people not to go to the pubs, only because he wanted to protect his mates in insurance in London.

Many hospitality employers refused to use their £75 billion profits to cover lost workers’ wages or top up the 20% when we had furlough, despite us being the ones who make them their money.

We’ve had empty promises. The UK and Welsh governments make ‘bold’ announcements pretending they care about workers safety, when in reality they just want to maximise profits.

The previous 10pm curfew was dangerous and counterproductive in fighting the virus. The queues were longer and there were more gatherings. We were even more overworked and understaffed.

You get the odd customer who just wants to cause trouble or doesn’t believe in the virus, but the overwhelming majority of people genuinely want to follow the rules for the benefit of themselves and others.

But the rules, and especially the rules of who you can meet in a pub, make absolutely no sense, and they keep changing. And how can people remember it all if they’ve got alcohol in their system?

Bar workers aren’t against a 6pm curfew. What we are against is our living standards not being protected, and the hospitality industry decimated.

A hotel in Manchester had over 1,000 job applications for one job. But they still expect 30 in normal times.

It’s incredibly frustrating that hospitality isn’t being protected. Whenever we’re out of this mess, demand will probably pick up extremely quickly.

But the short-sightedness of the UK and Welsh governments is taking that opportunity away. The mood in my workplace is pessimistic, that things are going to get worse, we will be poorer.

We are tired of the likes of Keir Starmer refusing to say if he will back workers and unions over big bosses on concerns of safety. We are tired of Mark Drakeford not guaranteeing 100% pay, or failing to threaten nationalisation of job-cutting businesses.

Some call for boycotts of pub chains that should have treated their workers better. But workers are exploited everywhere.

How is boycotting particular places, meaning less hours and less money for the workers, going to help? Support unionising instead.

Being understaffed, underpaid, and having no control of the rota, etc, were always issues in hospitality. But they have now come to the fore as the Covid crisis is exposing the entire rotten capitalist society.

We have concerns for our safety at work, with security not always on. Some pub workers have caught Covid from customers.

The public sector pay freeze has nothing to do with protecting the ‘public finances’. It’s a deliberate political strategy. It suits the Tories if different groups of workers blame each other, to distract us from the real enemy, which is them.

Hospitality workers are now becoming local organisers. In London, Glasgow, and Cardiff, there are WhatsApp groups and Facebook pages.

It doesn’t matter how we organise, but we must organise. There is always one more person at work we could speak to, one more leaflet we could give out, and one more meeting.

I’m an assistant manager in a high street chain in Mike Ashley’s ever-expanding empire. Nothing could prepare us for the carnage the Tories have perpetrated at the end of lockdown.

We got a mere taster in the four days prior to lockdown. Customers flooded into stores in the days between the announcement of lockdown and its implementation.

During the lockdown itself, I drew the short straw in my store. I had to come in for what was supposed to be two days for click and collect.

Yet, within 24 hours of me agreeing to do the two days, it jumped twice – first to six days, then three out of the four weeks of lockdown.

I was burnt out. But in the three days prior to us opening, a skeleton crew, including myself, was tasked with preparing the store for reopening.

What did that mean? Three of us miserably failed to catch up on a month of price changes and merchandising, with the phone constantly ringing.

Gargantuan deliveries of stock and click and collect kept rolling in as head office tried to restock us with a backlog of new releases, having already missed a month’s worth of trade over the peak period.

When we finally reopened on 2 December, even with a full complement of staff, we were utterly overrun and overwhelmed. Thankfully, our store, which has a pretty good union density, was able to firmly keep to our customer limit. We’ve remained consistently at capacity, all day every day, since reopening.

Other shops, without a union presence, have been a free-for-all. Customer limits have either been inflated or thrown out completely, as bosses prioritise sales over safety.

Everybody in my store expects there to be a third lockdown after Christmas. The tier system goes out the window – households mix indoors as they climb over each other to snap up deals, with bosses watching from the comfort of an office out the back, away from the madding crowd.

Everyone is overworked and pressured to take on more hours. Nobody can afford to go off sick with the paltry statutory sick pay after a month at only 80% pay.

The threat of redundancies is looming. It’s a depressing walk home, after an exhausting day, seeing more shutters go down for good, and more high street names vanishing.

The Tories have only made it worse. The companies that can’t afford to open 24 hours won’t, and the ones that can will super-exploit and bully staff into working longer hours for little more than the minimum wage.

We need workers’ control and management of health and safety, because the bosses can’t be trusted to put us before their bottom line. We need at least a £12-an-hour minimum wage.

We need a multi-union campaign against snowballing redundancies with the call for public ownership. The high street isn’t sustainable under the chaos of capitalism, we need a socialist plan.

Supermarkets: They called us ‘key workers’, but wages stayed same while safety got worse

During the first lockdown, we were considered ‘key workers’. But our wages remain unchanged.

Some received limited one-off bonuses, others nothing. Our workplaces were unsafe.

Bosses eventually put in place measures required by the government. Most retailers seemed to get the idea that it would be wise to look after their key workers.

Then the age-old motivator, profit, returned with a vengeance. Taking the government’s lead, employers exploited the loopholes, and put staff under greater pressure.

We had to use holiday entitlement to cover isolation. Disciplinaries and sanctions for absence were reintroduced. Many were related to anxiety brought on by working in an increasingly unsafe environment.

Most retail workers accept December will be busy. Yet, to increase sales and make even further profit, some retailers will be opening even longer hours, putting staff at increased risk of contracting the virus.

Debenhams and Arcadia have exploited their employees over many years, and are now looking to cut and run. They should be made to open their books to trade union inspection, in preparation for nationalisation.

Supermarkets return bailout – it should have gone directly to workers

Usdaw rep at a Tesco warehouse

Supermarket giants Sainsbury’s, Aldi, Asda, Tesco and Morrisons are repaying £1.7 billion in business rates relief granted by the government during the pandemic.

During the pandemic, pre-existing class lines have been highlighted and frontline workers’ belts have been tightened. Nowhere is this more true than in the wage packets of retail and distribution workers.

The dominant supermarket chains have yet to deliver consistent hazard pay or a living wage. But Tesco, for example, has paid out millions in dividends to shareholders.

This £1.7 billion could and should be used to keep workers who are furloughed or have to isolate on 100% pay. But we have to fight for it.

As a rep for retail workers’ union Usdaw, working in a distribution warehouse, I have witnessed first-hand co-workers collapsing from exhaustion, heard about co-workers suffering with Covid, seen agency workers being forced to come onsite with symptoms or risk missing rent.

The anti-union laws were brought in by the Tories, and kept as law by the last Labour government. They can be scrapped and buried by a consistent and fighting approach by the unions to defend workers’ rights.