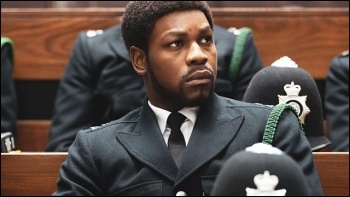 More than just diversity – we need democratic, working-class control of the police

The BBC recently aired the film ‘Red, White and Blue’ from the Steve McQueen mini-series ‘Small Axe’. The film is based on the life of Leroy Logan, a biology graduate born and raised in Islington by his Jamaican parents. It follows the start of his mission to join the British police force and fight to change it from the inside.

The opening 20 minutes of the film are filled with problems of the 1980s that are still here today. It starts with Leroy as a young child in school uniform, standing outside of his school, patiently waiting for his father to pick him up from music lessons. As he waits two police officers stop and search him, asking for his instrument bag with the tired excuse of local burglaries by “young black lads like yourself”.

One of the most powerful scenes occurs soon after Logan begins his application to the police when his father is brutally attacked by two policemen as he tries to explain that he’s parked legally. After being hospitalised, his father faces several false charges including “assaulting an officer”.

While those early scenes of racism and harassment by the police are terrible, the racist abuse that Leroy suffers throughout the film, and throughout his career, are truly demoralising and show the extent of his challenge. This ranged from the casual racism of his manager describing his local community as a “jungle”, to the direct racist bullying of officers graffitiing “dirty nigger” onto his locker.

John Boyega expertly portrays the anger, frustration and loneliness experienced by black people facing racism at work. And, while today HR departments would claim to protect employees from such harassment, they can’t be relied upon to fight racism. Trade union leaders need to take up our demands and lead the fight against racism in the workplace.

The film did well to highlight the difficulties and battles of a young black officer entering a racist police culture, but it had very few scenes documenting the external impact of Leroy’s approach to changing the police. Despite being well known and liked by the older adults in his community, he struggled to engage with teenagers on his beat. Because, despite his soft approach, his uniform still represented for many a violent occupying force that oppressed working-class migrant communities.

One scene particularly exposed the historic divorce between the police and the ethnically diverse communities that they are meant to serve. PC Asif Kamali, an Asian officer who had similar hopes to Leroy, was conversing in Urdu to take statements from the victims of a crime. However, his superior officer stopped him and forced them to speak in English, despite the victim not being fluent. As is the case in many workplaces, the dictatorial chain of command stopped him from doing his job effectively. Asif didn’t last the whole film, between this and further racist abuse from colleagues, he lost hope that he could change the police and quit soon after.

In the open-ended final scene of the show, as Leroy also questioned whether he could really make a change, he shared with his father that he often thinks “the earth needs to be scorched, replanted, so something good will come of it”. In real life, he continued on his mission, and eleven years into his policing career, after the murder of Steven Lawrence and the release of the MacPherson report, Leroy set up the Black Police Association, which has particularly focused on increasing the recruitment and retention of black and ethnic minority police officers.

In a recent interview with Novara Media, Leroy was asked about this government’s strategy of “a changed complexion without changing anything about the culture.” In the context of the current and the previous Tory black, Asian and minority ethnic home secretaries, Leroy acknowledged how the state “bring in their own token individuals to be the messengers, even though they’re more draconian.” That’s why the Socialist Party fights for representation for communities through local democratic control of the police. We argue for the formation of elected bodies of representatives, from local communities and trade unions, that have the power to appoint and dismiss chief constables and senior officers, and would be responsible for day-to-day policing policies, as well as weeding out any racist elements or fascist sympathisers within the police.

But to totally eradicate racism from society, we would need to end the profit-driven capitalist system that has fostered racism as a tool to divide working people and maintain its rule.